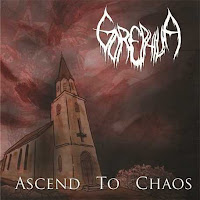 It's exciting to experience such a nigh endless wave of old school death metal approbation when the field had seemed so long cashed in and abandoned to the wanking modernity of the brutal tech institute, and Finland's Gorephilia are just another of those many reasons to return to the cycle. My first guess would have been that this band would resurrect the sounds of their forebears in Adramelech, Convulse, Demigod and Demilich, but what manifests is a brute mongering of early Asphyx, Grave, Incantation and perhaps a pinch of Dutch Pestilence (Consuming Impulse era). In particular, vocalist Henu sounds like a deeper, neanderthal approximation of Martin van Drunen's tone, and his presence above the dour melodies and bludgeoning undertow of mutes and chords lends this EP an enormous atmosphere.

Much of the Ascend to Chaos material moves at a crawl; but a kinetic, tactile crawl through which the double bass and grooves remain rampant while betwixt spikes of descending, morbid acceleration that conjure the creepiness of early 90s melodic scrawl. Once the intro passes, you're beaten with three great tracks in a row: the surefooted, lurching "Death, Chaos, Doom", warlike "Reaching the Divine End" and the more frenetic "Give In to Madness". Also of note is the nearly eight minute closer, "Tower of Bones" which channels the most variety in the lineup, from downcast death/doom to a chugging momentum. The title track is a caustic, dark ambient trip which places the listener squarely in the mood for such sepulchral erudition, so the EP is rather well rounded in all.

I won't say it's perfect, because not all of the writing is easily retained in the memory, and though it feels dark and sincere, it's obviously operating heavily within the plowed out landscape of its influences. Yet Gorephilia do well to mix it up between the primacy of the vocals and grooves, and the slicing, depressive miasma of the melodies, so you feel that same freakish authenticity you might have once felt for albums like Left Hand Path, Consuming Impulse, Nespithe, and so forth. Certainly worth a listen for every crypt hugger who desires death metal from where it belongs, beneath the soil of the grave; cut off from the airy span of the surface world.