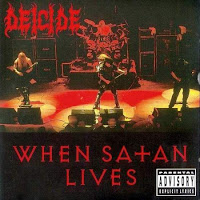 By 1998, most of the major Florida death metal acts had released some sort of 'official product' in live recognition, beginning with the involvement of Death on the Ultimate Revenge 2 VHS/CD, and more recently manifesting through Morbid Angel's British import Entangled in Chaos and Obituary's Dead. Even the New York impostors Cannibal Corpse had released their Monolith of Death VHS, so it was about time for Glen Benton and Deicide, notorious after all for their performances, to step into the circle. And thus they did with style: When Satan Lives, recorded at the House of Blues in Chicago, 1998, is quick to silence the naysayers through the precision and technical qualities of the band's constituents.

Probably the only negatives I can attribute to this would be the fairly bland cover setup and the fact that you're not going to be hearing much of Glen's snarling subtext, since he centers in on his blunt vocal hammering, and probably for the best. Like Obituary and Dead, the occult brutes offer the audience a substantial set: 17 songs and 55 minutes, culled from the wealth of their back catalog, and like Obituary, they used Steven Remote to record it on location, sending it off to their good friend Jim Morris at Morrisound for a mixing. The rhythm guitars don't possess a particularly rich tone, a trait that had held back several of their prior studio efforts, but the leads and their effects slice straight through the pummeling, thrashing ministrations to the point that I found myself paying much more attention than I had on the albums. Benton's bludgeoning comes off even more brutal in this environment, and on the whole Deicide make a good accounting of themselves here.

Set choices are pretty evenly distributed through three of the first four albums, though Legion is painfully underrepresented, being that it's their best album. Only "Dead but Dreaming" can be found in the list. On the other hand, they've been cautious in where they place their 'classics' for maximum impact. For example, they close out the disc with a mighty one two punch of "Dead By Dawn" and "Sacrificial" from the s/t 1990 debut, and have also included "Lunatic of God's Creation", "Oblivious to Evil", "Mephistopheles" and their "Deicide" namesake. Selections from Once Upon the Cross are the title track, "Trick or Betrayed", "Behind the Light Thou Shall Rise", "They Are the Children of the Underworld" and "When Satan Rules his World"; and Serpents of the Light rounds out the material with "Bastard of Christ", "Blame It On God", "Slave to the Cross", "Believe the Lie" and "Father Baker's".

As I've never held the band in the highest regard, I can't claim that I felt much anticipation, nor many highs and lows as experienced through this set list. What's most noteworthy is simply the fine level of execution. Both Hoffmans are consistently engaging with a level twin axe attack, and Asheim manages himself with the professionalism of a one take session drummer in the studio. The transition of most of the average quality tunes here to the stage setting does not elevate them in my estimation, and I find that much of this is nearly as indistinct as it was on, say, Serpents of the Light. I'm not suddenly more entertained by writing that wasn't all that special to begin with. But there's no question that this is one tight cadre of Hellish officers that deliver what they promise in the studio as a direct kick to the faces of the audience. It's not among the more impressive live metal offerings I've experienced in the past few decades, but stricter devotees will find When Satan Lives anything but a letdown.