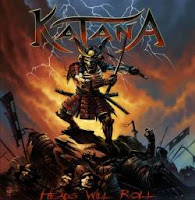 Garbed in threads woven straight from the NWOBHM movement at the dawn of the 80s, and a moniker that reads 'white guys (and girl) who want to be associated with something Japanese and therefore cool in the 80s', circa Samurai or Tokyo Blade, I present to thee: Katana. As one of the latest Swedish exports of melodic retro metallurgy, they are not without obvious precedents, from the lately fashionable act Enforcer to the longstanding veterans Hammerfall. That aside, they do a pretty reasonable estimation of a wide array of influences all over the classic British, Swedish and German spectrum, perhaps with a bit of Riot for good measure. Heads Will Roll is a total package, a debut bound to bring some notice, but it doesn't ultimately endure beyond a few entertaining listens.

This is essentially 1981-83 era trad metal rolled up into modern studio gloss and pumping power anthems, somewhere between Europe, Tokyo Blade, Dio, and Maiden. Johan Bernspång, the band's frontman, reminds me of Joacim Cans in tone, a solid set of pipes that tend to safely hover in the higher pitches without shrill, shrieking irritation. The riffs employed in chargers like "Livin' Without Fear" and "Rebel Ride" are busy without being needlessly complex, and several ("Neverending World", "Across the Stars") remind me of highly of Iron Maiden's signature mid paced momentum, Bernspång gearing towards a Dickinson-like phrasing where suitable. There are a number of track that lyrically deliver the Nippon-isms ("Blade of Katana", "Asia in Sight", and of course "Heart in Tokyo"), all keeping in tune with the band's image and concept, but the subject matter also ranges from feel good rockers ("Rebel Ride") to Greek mythology ("Quest for Hades", the most dynamic and innately narrative of the tracks).

The band is tight and the dual leads are flying out everywhere, from the actual solo sequences to the airy stratosphere above the rhythm guitars. The basic tone of the chords is crunchy and powerful, yet the melodies catch enough air to distinguish themselves as a central force. But far less successful is Katana's ability to stand out on an ever expanding field of such artists trying for a bite of nostalgia that they were mostly to young to have experienced first hand. Add to that the fact that we've got hundreds of superb records already in rotation from the formative years of the style, and Heads Will Roll seems a little less revelatory. Though the Swedes pay attention to the details and proffer a pastiche of authentic cliches to suit the less demanding generation just breaking into this scene, I found it a little difficult for my memory to hang onto these tracks. The extra 'magic' that a band like Enforcer conjures is simply missing here, and nothing more than a competent, occasionally catchy mirror of olde remains.