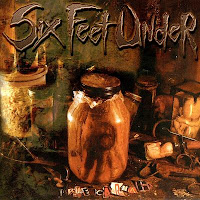 Chris Barnes' Six Feet Under is like a diseased cur that refuses to be put down. Its bark and bite are equally weak, but for some sanity defying reason, Metal Blade records would continue to support this stray mutt's crusade to rain distaste down among the distasteful. At best, the quartet have the ability to create mediocre, tired tropes of groove-laden death metal, and at worst, they are an abomination so heinous that only the veterinarians at the pound dare examine them closely. True Carnage is the band's fourth original studio album, and the worst today, making its predecessor Maximum Violence seem like a glittering jewel by comparison. Fuck, even the first Graveyard Classics collection gives it a run for its money...

The most that could be said for the first 3-4 tracks is that they are simply pedestrian, with zero value whatsoever when held against nearly anything else in the field of death metal. "Impulse to Disembowel", which opens the album, is a treacherously boring groove/slog with a generic fast break and a taste of Barnes most awkward contrast in grunting and snarling to date. "The Day the Dead Walked" at least tries to create a proper old school death atmosphere, with a nice fast pace joined to its thick bass, but the riffs are flat and uninspired, and would never have made the cut for The Bleeding. We're only getting started though, because the depths of this album take a turn south from even this material! "One Bullet Left" is a gangsta death metal song with Ice T guesting on vocals, and fucking pathetic. What's hilarious is that the Original Gangsta takes a punch at critics in his flow, as if this were going to somehow shield this sad band from their due in negative reaction. Ice T can do much better than this, hell even Body Count was better than this, and once Barnes rejoins the proceeding with his grunts it becomes more than awkward...

But hell, I could just wallow in the irony and be amused. I might say the same for "Snakes", in which Barnes grunts the title over a bouncy groove metal chugging sequence numerous times. It's goddamn ridiculous, but almost comic in a base way, at least when you take a step back and stop using your brain to process thoughts. Unfortunately the music in this song sucks, like a slam pit hymn from Disturbed with bouncy, jump da fuc up rhythms. "Knife, Gun, Axe" is another hideous bouncer with a few Prong-like rhythms circa Beg to Differ. Barnes' primary gutturals here get good and low, almost like a Will Rahmer (Mortician), but then he ruins them with these machine gun snarls that sound like a bad joke, like Salacious Crumb providing commentary while Jabba the Hut is being strangled by his captive Princess Leia. Then we've got "Sick and Twisted", on which another guest appearance is manifest through Karyn Crisis. Now, I've seen her main band a number of times, and she's a pretty eclectic personality, but hearing her wig out alongside Barnes' bludgeoning voice is a headache I do not wish to repeat.

The only 'carnage' this album produces is in the removal of its listeners' gray matter, leaving the mush to soak in a toilet bowl. Was Chris just getting stoned and trying to fill out a contract? To remain productive without any semblance of a good idea? Surely the guy has written better in the past, but this is easily one of the worst offerings from Six Feet Under, and one of the worst Florida death metal exports in history. Its production is muffled and uninspired, it has an anomalous ability to produce not even one good guitar riff throughout 34+ minutes of material, and it seems almost entirely phoned in, as if the accumulation of 'guest spots' would somehow compensate for its myriad faults. There might be a giggle or two here for those who revel in the dumpster of death. Otherwise, avoid at all costs