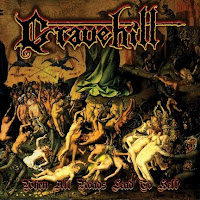 We don't get a hell of a lot of quality death/thrash or black/thrash from here in the States, so California's Gravehill is a bit of a treat, in that they perform so well a style which I usually associate with the European regions like Sweden, Norway and Germany. Two years ago, they released their debut Rites of the Pentagram, an amusing burst of hellish atrocity which they were able to capitalize upon with some live gigs and a trickle of hype among the underground. Well, the sophomore has arrived: When All Roads Lead to Hell, and the band should solidify themselves as a real name in high strung, vicious abuse with all of the appropriate influences, from Venom, Slayer, Bathory and Mayhem to a bit of volatile punk and grind (maybe Discharge, Repulsion).

Overall, When All Roads Lead to Hell is actually not so strong as the debut, but you would not know this from the initial volley of 3-4 tunes. The band keeps on balling its fist to punch you in the tits. The climax comes with "Extinction", a track that opens with a Mutant Chronicles (film) sample of all fucking things, and a flurry of writhing, diabolic rhythm guitars that would do both Slayer and Exodus proud, at least until the rather drab breakdown. Other highlights include the hardcore bludgeoning of "Devil Worshiper", the violent outbreak of "Unholy Executioner" and the vipers' nest that is "Pray for War", but there are no songs I'd actively consider 'bad'. The downside is just that, as exciting as they can be, much of the writing casts that familiar shade of pain that we've heard countless times before in faster death, black and thrash metal or any combination of the three. Nothing is necessarily ripped off, just feels like a hash of ideas being recycled from twenty years of extremity, with little curious being added.

That said, I do like the album, in particular the dense production which well balances the guitars and drums, and the bleating terminus of Mike Abominator's loathesome, sore throat sedition. The band is not all thrust, they can crop up an atmospheric sequence where it suits them (like the weary battlefield that closes out "Pray for War") and change up the pace accordingly (as in "Consvmed by Rats"). But I couldn't help but think that if the band had a half dozen or so riffs as mighty as that which leads off "Extinction", they would be one of the best bands out there. In the meantime, I'll settle for the fact that they're one of the few American bands that can pull this off and make it sound authentic.