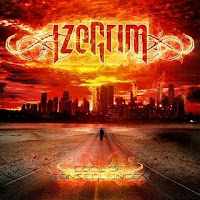 Though I'm sure the members of Izegrim are by this point sick of the comparisons, such will inevitably be drawn to the popular Swedish and English collaboration that is Arch Enemy. This is not simply due to Marloes' long blond locks of hair and similar energetic attitude as Angela Gossow, but the proximity in composition and overall style. You see, the Dutch band also plays a mixture of melodic death and thrash metal with the howling, rasped female vocals. Alas, there are some minor deviations in form that make the two distinct from one another. For one, Marloes plays bass too, and the guitars use a more forceful, chugging tone that feels like laying out bricks against the listener's face, even if the individual guitar lines are not so catchy as those that Chris and Mike Amott have been able to conjure through the years.

Otherwise, it's not a large stretch. Competent musicianship, concrete rhythmic sensibility and a blend of bursting speed and primal mosh oriented grooves. As a track like "My Secret Society" so ably proves, Izegrim can appeal to both the old school thrashing sect stoked on Sodom or Kreator to the post-Carcass variety of harder hitting melodic death. Actually, a mix of Amott era Carcass and Dutch countrymen Dead Head is not far from the mark. Clearly songs like "Fade Into Obscurity" and "Psychopathic Mind" will hold some appeal to fans of Necroticism and Heartwork, tautly woven melodies inherent in the hammering muted streams of release, but Code of Consequences also gives itself ample room to breathe with sparser constructions like the title track and the atmospheric thundering of "Incommunicado" and "Center of Momentum". At points I felt like Marloes viscous sneer was prone to monotony, and I'd like to hear her stretch her tone for more emotional range and devastation, but she does hit pretty hard regardless.

Otherwise, the one thing holding this third album from greater staying power is a noted lack of really distinct riffs. Unfortunately, that's a critical setback. All of the songs are consistent enough, solid as a hammer for straining the neck in the live setting, but there are too rarely those moments of careening melodic bliss or addictive rhythmic penetration that would make me want to revisit this often in the future. Code of Consequences is little more than a reliable alternative to Wages of Sin, hard enough to bloody the nose but perhaps not enough to break it. They've got most of the ingredients necessary to cast their spell upon an audience already saturated to death with modern thrash and melodeath, but there is that one exotic, memorable reagent missing that would truly spill the cauldron over.