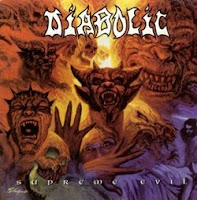 Diabolic swept into their respective scene like an infernal phalanx of mercenaries, immediately adapting to the speed and virility of their Floridian forebears. Supreme Evil was released only a year into the band's career, a blazing effigy of anger cast in the mold of Morbid Angel or the higher velocity atrocities of Deicide. There's a brute, professional tone to this record, the equal of nearly anything their neighboring veterans were issuing forth, and the sheer strength and capability of Aantar Coates through both his footwork and blasting makes it all sound too damned easy. Now, Paul Oullette's grunting force was hardly novel for the day, and ultimately this was not a band bringing anything new to the feast of fiends. But as far as the 'generic' slaughter-garden variety of USDM was concerned, the high sonic standards and punishing delivery of Diabolic were nothing to scoff at, and while they might only succeed a fraction of the time at conjuring the malevolence and eerie atmosphere I so often associate with the finer records in the genre, they at least try, harder still than many of their established peers in the mid to late 90s...

I really love the guitar tone here, full-bodied and fetid. Morbid Angel circa-Blessed Are the Sick or Covenant, only more brazen, flowing fluidly through the dynamic architecture of rapid abuse and carnal, concrete breakdowns. "Sacrament of Fiends" and "View with Abhorrence" are two of particular favors amidst this writhing, punishing mass: the former a nice reward after the rather bland ambient intro, an escalating citadel of celerity spiked through with frantic abandon in the leads and some thundering double bass during the bridge; the latter threading tremolo duality into a surging start/stop sequence that ultimately manifests into a burst of bitter schizoid enmity. I also enjoy "Dwelling Spirits" for its brief, haunting intro and thick, gargoyle lurch that again reminds me of Morbid Angel's groovier orientations through Covenant or Domination, but with plenty of accelerated abandon. Other moments of worthiness: the razor tongued stream of dissonant chords hurled above "Wicked Inclination" and the muscular abrasion pent up within the titular finale.

There are a few tunes that lag behind these ("Treacherous Scriptures", "Ancient Hatred"), but not by a wide margin, and there's never really a point throughout the forgiving 32 minutes that you felt the festering ennui inherent in so many faceless USDM hordes. Diabolic are about as well scripted in their influences as it comes, and well aware of how to balance composition with both brickwork and variation, power and precision. Having said that, there's really not much of an impetus to acquire this record unless you're interested in more of the same. It's like being presented with a raw, rare steak, then asking the server to bring it back and return to you with something well done. Creatively and conceptually it does not manage to elbow past a Morbid Angel, Malevolent Creation or Deicide, yet it offers a better balanced aural equation, a blasphemy built to blueprint, a safe harbor from which to pursue an impetuous quarry. Supreme Evil remains one of the best albums of Diabolic, but this lack of uniqueness is one that infects their sum body of work.