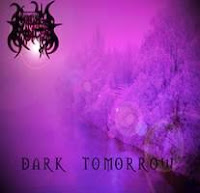 The Dark Tomorrow EP was originally released as a split cassette with a fellow underground Florida death act Eterne de Sade, but as that experienced a severely limited run, they would later produce a CD version, adding the cover of KISS' "Tears are Falling" that they had recorded for their prior label JL America. The style here is just what you'd expect had you been exposed to their full-length The Omega Factor: crushing, guttural death metal with a lot of mosh and squeal guitar work, slight peels of synthesizer. The primary draw for this band has always been the incredible power of their vocals, bleak dystopic/futurist lyrics and the oppressive atmosphere they created as a result...

If Dark Tomorrow has something up on its predecessors (Omega Factor and the Necrosphere EP), it's that the production is more solid. It's not necessarily strong, but far more cohesive and crushing than either of those releases. I was hoping that the band might one day return to the creepy cosmic potential inherent to Necrosphere, and that has not happened. Instead, they've ventured further down the straight course of brutality, thick and juicy low end rhythms crashing into brief spurts of melodic intent ("Ashes of Civilization"), measured variation and intense drum punishment ("Scourge"). I enjoyed the presence of the synthesizer on the title track, but then this is something I almost wish they'd have done more with, because clearly Killing Addiction would have served as a suitable alternate to the ailing Nocturnus, who have a similar approach without a mildly less brutal vocal secretion.

As for the KISS cover, well...it's about as ridiculous as you might think it would sound. I'm a big fan of the original, as I am much of the band's cheesy 80s hard rock output, so to hear it in the context of a brutal death act that gives Incantation a run for their money is precious. Beyond the shocking, almost ironic contrast, though, it's not all that great. Killing Addiction make a good attempt here to clean up their act, but despite the thick and muscled delivery which trumps the wealth of their contemporaries, they simply were not writing incredibly effective material, and I once again got the feeling they could accomplish more with better riffs and an increased integration of the frightening, atmospheric components that once inhabited their sphere.