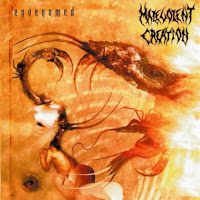 After the surprisingly creepy turn of The Fine Art of Murder in 1998, Phil Fasciana and Malevolent Creation would return to the more forceful, banal concrete aggression of their early years upon their 7th full-length, Envenomed. Brett Hoffman's services were once again retained, and the band dialed the brutality back up, sacrificing some of the atmosphere of the previous album for what must be the closest approximation of their debut, The Ten Commandments to manifest since 1991. Pummeling death/thrash grooves collide with Brett Hoffman's brash, lashing serious killer vocals and driving old school speed picking death metal rhythms. The band was working with both the Pavement and Arctic Music imprints for this record, but would this move and their renewed violence brook them their first smash in nearly a decade?

Not exactly. In truth, Envenomed is just another of the band's many releases which hover at the margin of quality without actively disappointing or inspiring anyone. There are a handful of cuts on this album that I truly enjoyed. "Halved" offers far more than the usual dose of Malevolent mysticism through the tyrannical opening sequence, effective hyper riffing, and breakdowns that you can actually feel in your gut. I love the freakish sequence near the close with the shrill wails as the cleaner intro guitars return. "Conflict" and "Viral Release" are likewise a lethal one-two combo delivered deep into the track list, the first a storm of Arabesque brutality with more tight breakdowns, the latter another fresh burst of momentum with penetrating, thick riffs reeking of implied, spooky melody. Also, the leads throughout Envenomed are especially well conceived, especially in the opener "Homicidal Rant". Fasciana and Barrett are on fire within these confines, though it would be hard not to credit Dave Culross' blinding solidarity as the performance of the album.

Alas, the majority of the songs are simply not that impressive. A taut, thrashing riff will emerge here or there, but so many of the guitars during the blast patterns are conjured with forgettable filler notation that fails to sink in. The production is finely balanced for the razor speed and punctuation which the band executes with the best of them, but it's also pretty dry. If one is truly in love with the band's first two albums, The Ten Commandments and Retribution, then this is probably one of the first of their later catalog that I'd advise turning to. It's a similar experience even if the overall quality falls somewhere short of the novelty and songwriting of those formative works. But if one is waiting for that long anticipated knockout blow masterpiece from a band that by this point should have had at least one, it's not to be found here.