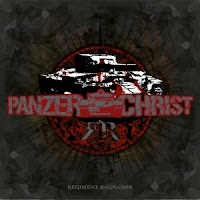 Long a staple of the brutal Danish undercurrent alongside fellows like Exmortem and Iniquity, Panzerchrist has never quite burst out into the venous walls of the average death fan's attention span, if only because there are simply so many options available that one simply can never get around to them all. That said, this is a band with a long history of quality. Perhaps none of their prior efforts could be called 'outstanding', but if you desire little more than your ass being handed to you through competent execution, albums like Six Seconds Kill, Soul Collector and Room Service are worth connecting to. It's been five years since the band's last full-length, Battalion Beast, and mainstay Michael Enevoldsen has undergone a number of additional lineup changes, adopting vocalist Magnus Jørgensen (also of Crocell) into the fold, drummer Mads Lauridsen (Konkhra), and guitarist Lasse Bak (ex-Illdisposed).

For Jørgensen, Panzerchrist is a bit more brutal and straightforward than his alma mater, though nearly as dynamic. His mix of grunts and snarls flesh out the compositions rather well, but as with nearly Panzerchrist album, it's the drumming that grabs the attention first. Thus, Regiment Ragnarok functions on intense blasting and mind boggling footwork, both of which Lauridsen possesses in abundance, an extremely reliable replacement for the well regarded Reno Killerich, who played on some of the better known albums. This is fast fucking death metal in general, but tracks like "For the Iron Cross", "The Armour of Armageddon" and "Ode to a Cluster Bomb" do well enough to balance the percussive transgression with riffs that are worth a damn: rapid and bleeding, belligerent melodies that might just as well be placed within the war black metal context as this thundering tumult. A few of the tunes like "King Tiger" and "Impact" are somewhat less interesting, if no less forceful, but the majority ensure that the Danish act retain their deserved title of 'the hyper Bolt Thrower' (just listen to "Trenches").

As with most of their backlog, the production is taut and intense enough to compete with the larger names in the wide spread of the genre, but admittedly the rather one track blasting that occupies the larger fraction of its play length does depreciate upon repeated listens. With only about a half dozen glorious riffs present through the compositions, there simply isn't that much to hold on to in the longer run. The Danes rarely hurl a surprise your way, simply endless volleys of focused discontent. Perpetual artillery. For some listeners, this might be enough to justify a purchase, but I found that, despite the considerable skill involved here, a pang of monotony, like listening to incessant machine gun fire. Terrifying at first, when one considers the viscera being chopped up through the bullet storm on the battlefield, but you soon become too acclimated to this initial shock value. Regiment Ragnarok is no pushover, but neither did I find it could hold my interest for more than a few spins.