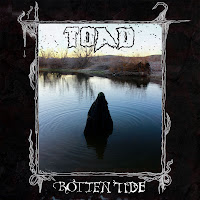 Sort of how Norway's Kvelertak successfully marries the youthful energy of blazing punk rock to a furious black metal rasp, so too does Arizona's TOAD conjure up a hybrid of burning, jangling rock & roll with occasional tremolo picking passages and a hoarse, tormented front man. The true joy of this Rotten Tide release, however, is the process the band used to record it, with only vintage instruments (from the 60s or 70s) and primitive distortion at hand, straight to an analog. So basically, this is a live recording, yet not a live album, and to that extent, the band sounds phenomenal, to the point that I can easily see how this might become a widespread process that many, many more bands want to get their greedy fingers on, and off their bedroom black metal home recording software.

But do the songs add up to the aural aesthetic? For the most part, though the vocals can often feel a tinge monotonous, the emotional real variation being a shift from the brutal bludgeoning to a more salacious sneer. There are five tracks here, adding up to just over 21 minutes, more or less an EP, and each brings something interesting to the table. "Midnight Hunger" rollicks through a scuffle of dire melodies, mid-paced mutes and tightly coiled thrashing acceleration, while "Pale Nimbus" evokes more of a traditional black metal aesthetic between the crushing chords and bleeding streams of dissonant melody, with a great finale. "Embody the Ghost" builds an eerie, rocking structure, and "Morning Disgust" is more open aired and breathtaking betwixt the big grooves. "Necrophatic Vatican" had an Entombed/Hellacopters thrust about it, at least until the gang shouts at the end, but this was my least favorite here.

Rotten Tide isn't bad at all. I like the imagery being conjured through both the band's choice in tonal structure and the cover art. They're doing something interesting, even if there are still a few kinks to shake out. I mentioned the vocals, and also the riffs themselves are about 50/50 on fire or dull. I'm not sure just how often I would listen to this, but if the band wa able to produce a full length using the same style but a greater dynamic range within the songwriting itself, with some more charisma to drive the lyrics down your eardrums, then I think Toad (aka Take Over and Destroy) would be worth getting excited over.