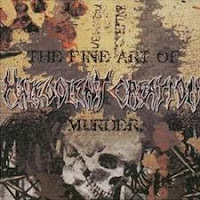 Few bands have such a substantial track record of committing faceless beatdowns to tape as the mighty Malevolent Creation, but I am happy to say that The Fine Art of Murder is not one of them. It’s close, sure, but that only counts in horseshoes and hand grenades. No, this is a decidedly interesting twist on the formula the band had been transgressing for nearly a decade prior, a swerve towards old school, primal death aesthetics that lend it a more ominous character. Perhaps this came with the re-acquisition of front man Brett Hoffman, who was present on their first (and still best) album The Ten Commandments. In fact, aside from Phil Fasciana, the Eternal Constant of Carnage, none of the parties responsible for the ultra brutal and ultimately bland In Cold Blood.

Robb Barrett returns on guitar, Dave Culross to the drum kit, and newcomer Gordon Simms joins Phil in the axe department. Together, the quintet very nearly makes magic, magic of the ‘malevolent’ sort that I had not previously been able to associate with a band whose nomenclature you’d think might assure it! Regardless, The Fine Art of Murder is successful in toning down some of the bands urbane/crackhouse dichotomy to a mesh of fibrous evil and a prior unvisited melodic space. A reactionary to the outpour of Swedish aristocracy that had taken the underworld by storm at this time? Perhaps not, but Brett Hoffman’s hoarse snarling resonates wonderfully over the sanguine speed of an “Instinct Evolved”, “Purge” or “Bone Exposed” like no one’s business beyond the mortuary. They were still occupying a space between their neighbors Deicide and Morbid Angel here, and this is an album I’d very highly recommend to Altars of Madness devotees

The band still conjures their signature street moshing violence through chuggers like “Mass Graves” and “Scorn”, but they also explore a more atmospheric territory through the creepy doom drawl of “Fracture” or the somber, fell glory of “Day of Lamentation” which even opens with acoustic guitars. I can’t promise that either has much in store for the necronaut, but it’s interesting that they even exist after an album so stubbornly brutal and sadistic as In Cold Blood. It’s this willingness to adapt and try their hand at such marginal variations of their past that has always kept Malevolent Creation in the game. This is not one of their best albums, perhaps, but its by no means a misstep, and with slightly more consistent writing and more standout individual riffs, it might have graduated into the field of the cult classic.