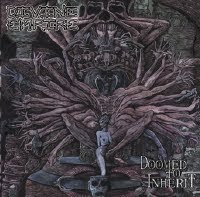 Divine Empire was only able to retain the services of Derek Roddy for a single album before he was off to greener pastures, presumably those made of money, but were quick to find an adequate successor in Alex Marquez, also of the Malevolent Creation family, having by this time already performed with Resurrection and Solstice. Doomed to Inherit was the second of three albums the band recorded for Olympic Records, and the band had developed into somewhat of a flagship for that roster, conjuring more buzz than any other new arrival to Florida death metal outside of Erik Rutan's Hate Eternal. I'm not sure they necessarily deserved such a treatment, but Redemption was solid it forgettable, and the groovier sophomore inches past it in terms of material.

Yes, I said groove, and a good portion of this recording is spent in simple, mid-paced riffing which involves a lot of chugging force far well below the competence level of the band members. Yet, when balanced off against the faster paced death/thrash rhythms, blast explosions and streams of melodic dissonance, it creates a successful degree of variation which strangely enough, seems original to Divine Empire (at least off the top of my head). Sometimes, this goes a bit too far, like the bluesy wailing over the bounce and chug of "Birth of Legends", and there are some vapid, uninspiring tracks like the peppy thrasher "Murder Suicide", but Doomed to Inherit also has some rather strong fare that ranks among the best in the band's career. Once again, they put the strongest song up front. Here, that means "War Front", a scathing brute with thick, plunking bass and brutal, curving guitar lines cast in flange above Marquez' hammering. Blachowicz hurls out the same blunt vocals as he did with Malevolent Creation, but the song is rather exciting.

Beyond that, further quality lies in the cyclic slaughter of "Repulsive" and the clinical canter of "Self Inflicted", or the rousing finale "The Culprit" which is similar in structure to "War Front". The ratio of wins to duds is about 6 to 4, but a few of those duds are at least acceptable. The comparisons to Malevolent Creation are obvious, perhaps the Stillborn and Eternal eras, and on the whole it's as good as the latter. I don't often feel any urge to listen to this album, or really any Divine Empire album, but this isn't a bad way to kill 30 minutes, even if the album isn't so technically aggressive as Redemption was. Assuming you don't mind some rather tepid, lazy grooves and chugs scattered about the more inspiring material. Fun fact: this is also the second and final Divine Empire album with a cover image that isn't awful.