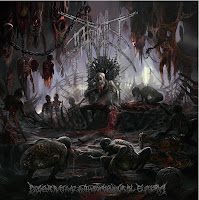 Italians Putridity are one of those bands of brutes who fully intend to add your name the list of the hearing impaired, pushing the end of the slaughter spectrum until it breaks. Degenerating Anthrophagical Euphoria is another calamity in the vein of their 2007 debut Mental Prolapse Induces Necrophilism, which is to say not a lot different than any other amalgamation of slamming force and alternating chug/squeal/blast/groove aesthetics that are rather exhausted this late into the game. Combined with crushing production that feels as if it's about to shake your speakers down like an avalanche, perverse and violent samples made to stir the man-flags and carnal voyeur fetishes of the disaffected audience, all pretty par for the course.

Thing is, none of these are necessarily impediments to this sophomore. It's the stubborn lack of dynamics that dampen its appeal. While many of the Italians' local and international peers are ripping up the fretboards in displays of acrobatic arrogance and diligent proficiency, Putridity are content to return to the same percussive concepts time and time again, and though there are interesting connective tissues (the noise/ambient/feedback interlude "Wallowing in Aftermaths" or the grinding mosh slog that inundates "Masturbating the Infibulated"), it feels like a single song hacked into about eight nearly identical fragments. Granted, close examination will reveal separate tempo changes, guitar fills, and drum variations, but effectively its just a 24 minute excursion into pummeling monotony with nary a compelling pattern of notes in listening range.

Chug, chug, grunt, grunt, squeal. We've simply heard this too many times for it to persist in its shock value of the 90s, or for it to honestly feel that aggressive anymore. Sure, from a technical standpoint, the down tuning and sheer strength and precision with which the musicians batter their instruments might feel 'heavy', but it's all been done by Devourment, Mortician, Disgorged, Suffocation, Deeds of Flesh and hundreds of others, and ultimately Putridity come off as little more than exhausting. I dig the band's canny vernacular: "Syphilic Menstrual Rejection", "Cannibalistic Post Climax Flesh Consumption", "Draining Necro Anal Disgorgement". I giggled just like I did when Carcass and Cannibal Corpse started the practice. I dig the cover art. The logo. I even dig the band's commitment to such overwhelming brutality. I simply don't dig the tunes all that much, and Degenerating Anthropophagical Euphoria is little more than a linguistic and musical clutter, albeit a brief one.