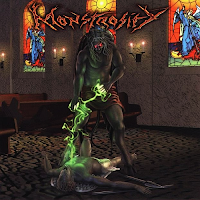 Having had the Corpse wagon arrive and wheel away George Fisher to ghastlier and richer pastures, Monstrosity were forced to put up or shut up. They chose the former, acquiring the maniacal Jason Avery for their new front man, and proceeded to pen a more balanced attack than their sophomore Millenium. Avery’s got a standard, blunt tone very reminiscent of the Corpsegrinder, without the snarls that George will occasionally weave into the percussion of his voice, but any lack of variation in the gutturals is recompensed through the dynamic musical palette.

In Darkest Purity can be just as fast as its predecessor when it needs to, but the songs are even more thoughtful and widespread without losing the characteristics of intense double bass via Lee Harrison, or surgical riffing techniques that were competitive with the very best in the genre, if not quite so distinct or memorable. A few of my favorites include “Suffering to the Conquered”, one of the most beautiful Monstrosity efforts in their history, graceful spires of dual melodies writhing through the intro and verses, especially that ascending stream of mutes after the :50 mark. The leads in this song are particularly good, mirroring its somber and elegant aesthetic.

Elsewhere, there are a few prime technical death/thrashers not unlike the finer points of the sophomore album. I speak of “Destroying Divinity” and its robust, razor sharpness, the resonance of Avery’s grunts cast above the merciless landscape like hellish nets. Or “Dust to Dust”, a straight burst of speed limit breaking enhanced by the cymbal crashes and almost exotic melodies immersed in the central rhythm. “Shapeless Domination”, “Embraced by Apathy” and the instrumental “The Pillars of Drear” are also highlights, though the rest of the album is give or take, with a mix of slower chugging pieces and primal bursts redolent of what Cannibal Corpse were writing with their newly acquired link to this entity.

The production is highly polished, all notes cleanly executed and the various instruments balanced off well against Avery’s apocryphal bludgeoning, and perhaps In Darkest Purity might be regarded as one of the prototypes for the new wave of technical, young USDM acts of the 21st century who followed suit. The lyrics are again decent, a near constant characteristic of Monstrosity, but the cover art to this album is nearly as awful as the sophomore. Minor gripes aside, this is a functional effort which proves life after Fisher, and still feels fresh to date, even if its not their most memorable work.