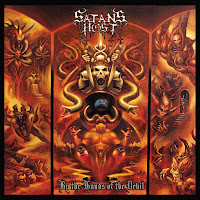 Harry Conklin is keeping his calendar full in recent months, first with the ended hiatus of his mainstay Jag Panzer, and now by rejoining his sinister alter consciousness Satan's Host. Now, while the Tyrant has not fronted the band since their unsung classic debut Metal From Hell in 1986, the Colorado cult has hardly been inactive. At least not since the other members got their shit together at the turn of the century and released a string of albums that flew below the radar of many. Titles like The Great American Scapegoat 666 (2008) did display some ardent potential, but with Conklin back in the fold, they're a far closer approximation to their former, glorious and blasphemous selves.

Obviously, through the gulf of 25 years, studio production capabilities have advanced readily, so this is a far cleaner aural visage than Metal From Hell itself. But despite that, there are clear differences between this and Jag Panzer. Conklin explores the same general range and pitch as he has for the past decade in that better known entity, but the musicians marry this to a more malignant mixture of traditional heavy, power and even the occasional melodic black metal outburst ("By the Hands of the Devil", "Black Hilted Knife"). The guitars are far more potent and less processed than, say, Scourge of the Light, but they're not without their own melodic distinction, fused into the thundering footwork and campy occult lyrical concepts. What's more, the band will erupt into these climactic sequences like the gang shouts of "Demontia" that will force every non-poseur in miles to suppress an impish grin.

The depths of this album are simply loaded with memorable, arching vocal hooks ("Inferior Worlds", "Fallen Angel") and escalating overtures ("Norwegian Wood", "Revival") that will easily support your investment, and what you're left with is a beautiful osmosis of classic 80s Jag Panzer and Mercyful Fate, which, if you've got even the faintest shred of dignity or taste, will initiate an abyssal erection a quarter century in the making. For Conklin to reintegrate himself so effortlessly back in this long submerged outfit is a miracle in of itself, but to then produce a work superior to anything he's written with Jag since Ample Destruction is mind boggling. By the Hands of the Devil is very easily recommended to anyone who appreciates dynamic, memorable heavy metal basked in a hellish undertow. Now to cross my fingers that I don't have to wait 25 more fucking years for this to happen again. I may have lost my hearing by that point, if not my life.