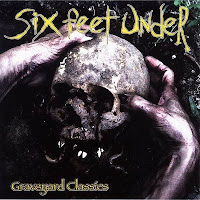 Chris Barnes and Six Feet Under had been scattering cover tunes over their past three releases, hitting up some of their most obvious influences, or really the obvious influences for any metal musician over the age of 30. Thin Lizzy, Iron Maiden, Judas Priest, and KISS are not the most unusual choices, nor did this drab death metal rebound do a hell of a lot to improve upon them other than slather them in Barnes blunt incantations. So it's not exactly out of nowhere that the idea was birthed to provide an entire album's worth of fare, presumably for the fans to digest, and noting a few of the selections the band has made here, presumably to inspire the younger lot to seek out a few classics they might not be aware of. This, of course, is assuming that there actually ARE Six Feet Under fans. Are there? I've never met one, but someone must be buying this shit.

To be fair, Barnes and the boys have made some pretty intriguing selections. Most impressive to me are the NWOBHM and classic metal pieces. They've got "Confused" by Angel Witch and "In League With Satan" from Venom, in addition to "Son of a Bitch" by Accept, and the great "Holocaust" from fellow Floridians Savatage, which is likely the most unexpected on the entire disc. Unfortunately, none of these offer more than the basic ingredients, thicker in tone but less effective than the originals, so we're supposed to get by on the novelty of Barnes' vocals alone. I suppose it's funny the first time you hear someone performing Udo Dirkschneider or Jon Oliva lines in gutturals, but really, after about 30 seconds, the humor is lost upon me, after all it's been done a thousand times, even by myself. It also doesn't help that these are all boring as fuck, in particular the Venom tune.

6FU stretches back a little farther to further cultivate their dope habits with Black Sabbath's "Sweet Leaf" and Deep Purple's "Smoke on the Water", and we're treading on all too obvious territory with these and the rest of the album's selections. Again, there is is no impetus to ever dive into these versions, as they're incredibly bare bones rendering could be achieved my just about any band jamming in their practice space on a Friday night. The most aggressive cover they've chosen is "Piranha" by Exodus, a pretty exciting song that would seem a natural for a death metal act, but yet again comes off wholly uninspired. A couple of generic punk pieces like the Sex Pistols' "Stepping Stone" (a cover of a cover) and the Dead Kennedys' "California Uber Alles" don't exactly quicken the pace, and the rest are all rock staples: Jimi Hendrix' "Purple Haze", the Scorpions' "Blackout" and AC/DC's "TNT", the last of which is arguably the most potent fun on the entire disc, even if it's as retarded as the rest.

Graveyard Classics must have been some sort of a hit, because Metal Blade and 6FU would go on to release two more volumes later (the third of which is admittedly the least annoying). But in all truth, this is even more petulant and loathesome than the band's original albums like Haunted and Maximum Violence. Chris Barnes does not have bad taste in music, but he's also not very good at performing that written by others', much less himself. Thus, it's hard to view a taste numbing tribute disc like this as anything more than a cash in on Barnes' post-Cannibal Corpse 'celebrity', milking this sluggish, sorry parade of failure for all its worth, scoring pocket change for a gram of forget. Meanwhile, his alma mater was releasing a record so good that this is even more laughably by comparison...