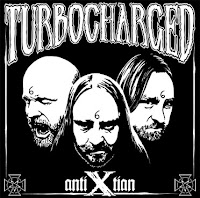 Some of you might be familiar with the Swedish band Gehennah, who once offered us a Molotov cocktail of street attitude, black punk thrash & roll not unlike the better known Impaled Nazarene. A few of their albums like Hardrocker and King of the Sidewalk had a sizable following, and justly so, as they presented a fun alternative to the more serious black metal of the mid-90s. I mention them in context here because the Turbocharged bassist/vocalist Ronnie 'Ripper' Olson was a central figure in that defunct act, and AntiXian features many comparable attributes: street attitude, concoction of punk and thrash rhythms with a malicious, blasphemous sense of humor that eclipses the vitriol of his alma mater.

The ploy here is to craft simplistic rhythms with enough fuel to get the drunken, leatherclad audience in an uproar, and to that extent they mirror the works of myriad other death & roll or black & roll artists. Gruff, pissed off vocals and gang shouts dominate the rock beats while the guitars scorch along between primitive punk metal and choppy leads. The production on this debut album is quite expansive, far more resonant than the music itself, and I appreciated the balance of oozing bass presence and thick chords. Unfortunately, there just aren't that many riffs of interest throughout. Turbocharged can graft together an effective crowd pleaser like the title track, "Ghetto of Eden", "Globalize the Blasphemy" or the slower chugging thrash in "Species of Jesus", but there is little memorable outside of the bitter hardcore aesthetic. Olson's a pretty good front man, a lot of bark to his bite, but much of AntiXian lacks substance beyond the shouting and circle pit instigation.

Fans of metallic crossover acts like the Drünken Bastards and Children of Technology or even the grindier outlets of Nasum and Rotten Sound might wring some enjoyment out of the record, but none of the songs stuck to me, not even those with colorful titles like "Wake Up and Smell the Christian" or "Horns Forever Raised". There's a certain point at which these simpler punk-fueled chord selections fail to impress me anymore, no matter how pissed off they seem. It would be nice to hear some memorable notation and clever subtleties when one is writing in such a well traveled context. These Swedes are not entirely generic or void of merit, and AntiXian is not a bad entrance through the starting gates, but I never felt the same urge to smash bottles or piss on my neighbor's property like Hardrocker or Latex Cult once invoked.