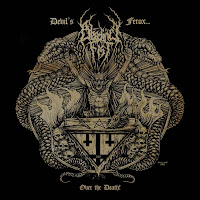 It might just be that I've been spoiled through the years, but I must admit I've grown tired of hearing the same thing over and over, to the point that it becomes a predictable washout. Such is the case for Slovenians Bleeding Fist, who have shown in the past a capability to create some raw, punishing black metal with dire atmosphere and cryptic if cliche Satanic occult lyrics. They continue to do so with their latest EP, Devil's Ferox, yet another in a ceaseless tirade of releases that draws upon but does not significantly alter or elaborate upon the formula manifest through Venom, Bathory, Mayhem, and other primal, old school thrash, death and black metal that countless acts have channeled into the present.

Now, from this opening paragraph, you might assume that I hated this disc, but that's not the case. Bleeding Fist are not bad. The band is clearly competent at conjuring their wall of vapid force, straight laced storms of sin ala "Monuments of Desecration" or the 7-minute title track, which breaks into some half-cooked rocking thrust. Hellscream's rasping has a way of echoing out across the din of the black metal clamor with appropriate agony, but the riffs below are in general little more than uninteresting noise played at high speeds without memorable patterns of notes. Glistening, 'evil' extractions of chords and shadowy atmosphere pervade the 26 minutes, but despite its authenticity, there is no glaring malevolence or subtlety within. The band's "Black and Violent" tribute to legendary Italians Death SS is perhaps the most distinctly morbid piece on the album, but even this is unable to hang on to its qualities for very long.

If you're a stickler for the traditional, raw black metal appeal then I can't see any reason to tout Bleeding Fist as anything more than another random draw from the Satanic sweepstakes. I don't hear a ton of this style coming out of Slovenia, so there's a hellish scrap of novelty, but I had hoped this EP might be an improvement over last year's Macabrum Bestia Ex Abyssus, which I also didn't take to. Not the case, and I fear Devil's Ferox will be yet another of the blasphemous and faceless objects among the heaping hordes of doomed obscurity. Never actively offensive, never bad at what they do, just not that compelling in the end.