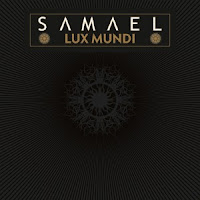 Having long harbored an obsequious deference towards Samael's 1996 epic Passage, I have eagerly awaited, with each new album in the band's repertoire, a return to that cosmic plateau of songwriting capability. Through Exodus, through Reign of Light, and then the lacking Solar Soul, the the subtext might not have changed from the Swiss band's electronic/dark metal hybrid, but the returns seemed to diminish as the band would foray into goofier vocals and betrayed potential, all in the name of crass experimentation. Enter Above, the band's last album, and there was a slight angling back towards the path of greatness they once strode mightily upon. It was a heavy album, the heaviest since their formative black metal years, and an enjoyable one, but I could not help but feel something was missing...

Only to be 'found' for Lux Mundi. No, the 8th full-length is not precisely the long awaited return to flawless, iconic composition that I was crossing my fingers for this past decade, but it's about as close as the band has yet come to Passage. A number of the tracks cautiously merge the stomping gallantry of the primal metallic guitar patterns with the extra-terrestrial, ethereal use of choirs and symphonic components that converge upon Vorphalack's garbled prose like alien shadows, backed by an even more realistic feel to the drum programming. No, these are not compositions with the immortal capacity of a "Jupiterian Vibe", "Moonskin", "Rain" or "Shining Kingdom", but you'd be surprised just how close they come in terms of overall atmospheric aesthetic. Pieces like the bombastic "Of War" or "In the Deep" and it's harmonic plucking come startlingly close in theme, riven with crushing philosophical weight in contrast to the beautiful, interstellar aspersions cast through Xytras' keyboards.

There are a few mildly lighter, accessible tracks ("The Shadow of the Sword", "In Gold We Trust") interspersed among the heavier fare that should thrill devotees of Reign of Light or Eternal, only threaded with a greater perceptible ballast. But the majority seem to have a martial pattern to them which recounts "Jupiterian Vibe", with lots of jarring chugs and militant swells that satisfy the listener's sense of wonder and belligerence. To an extent, Lux Mundi does feel like a regression, as if the band were coming full circle towards stretches of space that they had previously saturated in sound, but this is only harmful if you loathed the band's 1994-99 body of work, which I clearly did not. This is at least the best the band has written since its divisive Eternal, and in truth it's better mixed and more muscular sounding. The album feels quite a lot like greeting an old friend through an airlock, the landing bay behind him cast in the glow of a crescent planetary body and manifold of distant stars. Permission to come aboard? Permission granted. Well done. Welcome back. Take off your space suit and stay awhile.