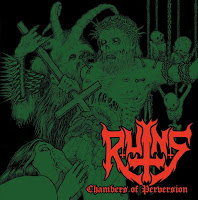 Far be it for me to miss an album called Satanic Bitchpenetration, but in this case, miss it I did, and thus prolonged my exposure to the grimy German motherfucker known as Ruins. Well, my ignorance in this matter has come to an end, and I have found sufficient violation of my earspace in the 2010 EP Chambers of Perversion, a cheerfully unholy abomination of black, thrash and punk riffs with some of the most sick, splattering vocals I've had the honor of experiencing in some years. Seriously, think what might occur if early Corrosion of Conformity (the Animosity EP), Bathory (pre-Blood Fire Death) and Voivod (first two albums) collided into a vortex of whores, guts and each of the seven major sins in no particular sequence!

Know Ruins, know Chambers of Perversion, and know about 18 minutes of life that you'll simply never want back. Good, not so friendly, filthy fun, from malevolent blaze of the title track, "Slaves of the Undead", "Sodomy in Hell" and "Slutlust and Perversion", to the wailing lead of "Primitive Evil", and the impressive, more serious mood of "War in Heaven Pt. 4 (Perversion)". I just love the reverb used over the churning riffs in that one while the vocals slather and smear their foul libations upon the listener's ear. I must say, that for a work borne of some predictable punkish/thrash riffs and little subtlety, it's amazingly infectious. Like at any brothel of ill repute, you are unlikely to enter this wretched maw and come away with nothing but your good health. You're sure to experience a relapse to the beloved disgust you once felt for Under the Sign of the Black Mark, Latex Cult and the Deathcrush EP.

And if that's not a glaring enough recommendation, why are you reading my reviews? Ruins is well worth a purchase to any fan of the most raunchy, rude, counterproductive blasphemy on Earth, a source of inevitable amusement to the twisted and distraught. Acquire the original 10" or the CD re-issue on Negative Existence in any way possible. Thank you for your time. Oh, and before I forget. Die!