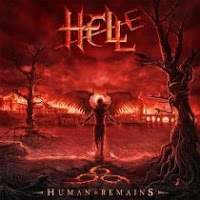 I can first remember encountering Hell through a late 80s interview with members of the British speed/thrash legends Sabbat, in which they cited the obscure NWOBHM act as a major influence in both their stage theatrics and Martin Walkyier's charismatic approach to vocals. Some years later I was able to hear them, mildly impressed by the wanton wailing of Dave Halliday and the campy, occult lyrical aesthetics. How sweet and ironic then, that nearly 30 years after the unknowns were releasing demos, they would rebound with a new leash on life, none other than Andy Sneap himself (who was taught the guitar by the late Halliday) joining the prodigious resurrection and helping upgrade them into a modern context and contender!

Of course, with Halliday having passed away decades ago, it would prove a tall order to fill his capable shoes. Originally the plan was for Walkyier to join, and so he did for several years. This might have proven a wicked and fruitful union, even though Martin did not have the obvious range to tout as Dave. In the end, they acquired Dave Bower, a British actor, sibling to guitarist Kev Bower, and what a damned find he is! You see, it is Bower that makes or breaks Human Remains, the first studio album in the band's career. With the shrieking, quivering capacity of Warrell Dane in his prime, the savage snear of a Jon Oliva, and just about any capability within those two climes, Bower is one part air raid siren, one part Faustian caricature, and three parts metal to the bone. You don't hear a 'comeback' like this every day, especially when there's really not that much to 'comeback' from aside from a wisp-like, evasive underground legend. Against all odds, Hell has done so.

Now, there has been all manner of hype surrounding this album since the signing to Nuclear Blast and the sample/video that has been floating about, exposure largely to an entirely new audience who never had a chance to experience the band. It would be an exaggeration to claim that Human Remains is some messianic monolith lain dormant for three decades. It's not THE BEZTEST ALBUM EVAR. It's not perfection by any means. However, it is damned good fun, and you simply do not experience such personality from your garden variety bands performing in the traditional and power genres. In fact, there's a damn dearth of quality music in these fields of late, and Hell is ripe to join a boot to the come lately, fledgling retro-metalians and severely lagging power metal bigwigs straight in the arse.

It's best not to think of this as a 'new album', since the material is reworked from the band's 1982 demos and 1983 single ("Save Us From Those Who Would Save Us"). It's slathered in the same pseudo-Satanic ridicule, featuring lots of intros and interludes which King Diamond himself would be hard-pressed to out-cheese. But once you dig past the pomp and romp, you're left with the skeleton of steady quality. The modern glint of the album's production doesn't interfere with the nostalgia of the original recordings, and though Halliday might have been better at 'selling' the material, Bower is simply a far more entertaining front man. Humans Remains ranges from full-on adrenaline pumping epics like "On Earth as it is in Hell", "Let Battle Commence" and "The Quest" to more structurally diverse tracts like "The Devil's Deadly Weapon" or the finale "No Martyr's Cage", meeting the audience half-way with heavy rockers "Blasphemy and the Master" and "The Oppressors".

The band also brooks no hesitation in retaining the sheer 80s flair of tracks like "Save Us From Those Who Would Save Us", scintillating keyboard cheese intro morphed into a thrust of venom; but the incredibly polished production keeps even this fluent with the more modern sounds of a Kamelot, Evergrey, or Symphony X. I do feel like there is often an excess of silliness to be found, like the intro to "MacBeth", or that the Sneap/Bower dual melodies and the vocals too easily trump the rhythm guitar backbone in the majority of the material, but these are in no way critical flaws that parsed my enjoyment of the record, not difficult to ignore in lieu of the variety of compositions. And the lyrics! Clever, semantic, jocular: certainly an influence upon Walkyier in both Sabbat and Skyclad. Most of them, anyway (not "The Quest"). Truly, there is something here for just about everyone who deigns to label him/herself 'metalhead', whether you're in it for the twisted irony, sinister vibes or just a flat out consumption of authentic energy. Welcome to Hell. Turns out to be a pretty lively place.