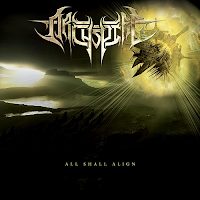 I came across this band in my last.fm recommendations list (it's actually useful) and I was floored by the debut from this new Canadian band. Hailing from Vancouver, British Colombia, this quintet plays technical death metal reminding me of another new band, the Ukranian Monumental Torment, and a bit like Origin - though honestly it's hard to think of suitable comparisons for these guys as I write this.

What I Liked:
For me the first thing that really clicked was the vocals - Oli Peters has the intensity Erik Rutan (Hate Eternal) wished he had mixed with the vocal speed and patterning of someone like Francesco Paoli (Fleshgod Apocalypse, ex-Hour of Penance). Peters sounds seriously pissed off, and he can write extremely catchy tech death vocal sections that flow seamlessly from growls to scream and while his lyrics are mostly science fiction-themed and well written, this isn't something you will be singing or headbanging along with very often.
Instrumentally, this is an extremely talented band. Dean Lamb and Tobi Morelli play some really catchy guitar riffs for tech death though some of it is perhaps helped a bit by the vocals matching the riffs so fluidly and seamlessly, you decide. The drums by Spencer Prewett are pounding and thankfully never boring or tired though when they're added into the whole mix they sometimes get forgotten in the cacophony. There's finally the bass-work by Jaron Evil which mostly follows the two guitarists, though as the bass is quite prominent in the mix this is not a problem in the least - one of my favourite bass tones this year so far, extremely satisfying.

What I Didn't Like:
The album did not feel long enough at 32 minutes - it's a pretty lame complaint honestly, but I felt that I was not exhausted after the 32 mins like I am with some albums, or content with the length like I am with other tech death albums (the Diskreet comes to mind) - the album closer "All Shall Align" while good musically doesn't 'close' the album suitably and just leaves me wanting more (in part due to it being a encore of the second to last song "Rapid Elemental Dissolve"). Also for once on a tech death album I think the drums could have been brought up a bit into the mix - as I mentioned earlier they feel somewhat lost at times.

This is a solid album, not much more I can say. I don't like writing track-by-track reviews, but I will say that "Archspire" and "Ascendance to the Summoning" would be my two favourite tracks on the album. Tech deathheads will enjoy this I think, though if you're like me you'll be clamoring for more eventually - and hopefully we won't have to wait too long.

http://www.myspace.com/archspire
Posted by Narian at 12:03 PM