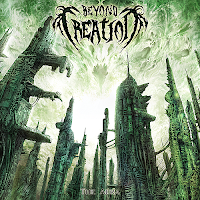 This is the first full-length from the Québec metallers - I have been patiently awaiting for this ever since I had to manually rip their demo off of their MySpace since there were no actual copies anywhere else - and the wait has not been in vain. For the uninitiated, I would describe Beyond Creation as a more brutal Canadian Obscura.

What I Liked:
I'll start with the obvious elephant in the mix - Dominic "Forest" Lapointe. I would be lying if I didn't say that the bass tone on this album is insane - though in my defence Beyond Creation was my first exposure to his work that I enjoyed (I really enjoy Augury now though). Vocalist/guitarist Simon Girard is another new vocalist I am really digging (and mimicking), his vocal styling mix is really well done - I especially enjoy the near pig-squeals mixed in at times. The guitars by Girard and Kévin Chartré are on par with most popular tech death out there today - that is to say extremely tight and well done (and to a level I can only wish I could play though that's to be said of most tech death). The drumming by Guyot Begin-Benoit is relentless throughout the album, easily up to par with anything someone like John Longstreth (Origin, Gorguts) has recorded in my opinion.

What I Didn't Like:
I only have one small critique - I felt that the vocals from the three demo songs were a bit different since they were rerecorded and my initial reaction was that the original vocal style was a bit better - something I'm sure most people will not understand or care about.

This is an album I have seen in some circles become really popular, and as someone listening to these guys for awhile, I am extremely glad this debut is getting the word-of-mouth support it needs. The whole album is solid from start to finish, again and again I find myself lost listening to this on repeat - Montréal/Québec metal never ceases to amaze me.

http://www.myspace.com/beyondcreationofficial
Posted by Narian at 12:54 PM