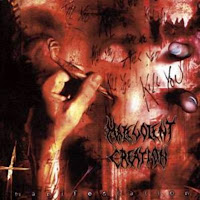 After boning fans in the wallet with the lackluster Joe Black comp four years prior, Pavement decided it was time to release a 'proper' collection of Malevolent Creation's works, packaged with quite an effective cover image that would have been better saved for a new full-length or a live experience. There are two discs contained with Manifestation, the first being a selection of reprinted studio tracks from the band's Pavement output (1995-1998); the second a bonus live disc with all of four tracks. Take a guess which of them has more value? If you guessed the latter, then have a cookie, because disc one is so stupendously worthless that they've even rehashed some of the material from the Joe Black release!

Let's face it. If someone was interested in a Malevolent Creation compilation, about the LAST thing they're going to want is repressed material from the band's most recent string of studio efforts that were still rotating in print. Pavement has answered the age old question of how one might sodomize a piggy bank. The track list starts as early as Eternal (1995), with "Living in Fear", "Infernal Desire", "Alliance or War", "Blood Brothers" and "Impaled Existence". "Joe Black" and "Self Important Freak" are incorporated from Joe Black (1997), and then the proceedings move onwards to In Cold Blood (1997), from which the title track, "Nocturnal Overlord" and "Condemned" have been drawn. Strangely, the most recent album The Fine Art of Murder (1998) gets top billing with SIX selections: "Bone Exposed", "Mass Graves", "Scorn", "The Fine Art of Murder", and "To Die Is At Hand". You just bought these! Buy them again!

It's really quite obvious why the band's first three albums are not covered here: the songs were in the legal possession of Roadrunner, their earlier label. However, this does not extend to the live material, and thus "Multiple Stab Wounds" appears in its supposed stage smashing glory along with three cuts from Retribution: "Monster", "Slaughter of Innocence" and "Eve of the Apocalypse". Unfortunately, none of these sounds that great here. The drums sound intensely mechanical, the guitars and bass reduced to the background while the vocals cut straight out across the top. It's far from the worst live recording I've heard, mind you, but not worth hurling forward the cash to pick this up unless you've made Malevolent Creation some twisted fetish.

Manifestation is a rip off, and the sad thing is, it's not the one a label will be molesting us with for this particular death metal band (Roadrunner will take their turn at the glory hole a few years later). The cover art is the best thing about this! The live tracks might be more fun than hearing the same shit you've already paid for with the past few studio records, but no real incentive is added. I may not be the biggest fan in the world of Fasciana's seasoned slaughterhouse, but certainly Malevolent Creation deserves better than this, and so do you.