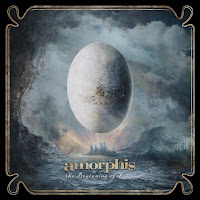 After shaking free their impulse to produce forgettable renditions of their classic material (dragging it forth unto the 'now') with newer vocalist Tomi Joutsen, Amorphis have returned to what actually matters: composing new songs that best suits the current lineup of the band. Having been well in favor of the last three albums (Eclipse, Silent Waters, and Skyforger), I found myself anticipating this much as I looked forward to each of their new releases in the 90s, but the streak seems to have hit a bump in the road with The Beginning of Times, their latest conceptual piece, and tenth studio full-length. It's hard to believe Amorphis have entered double digit albums and that it's been 15 years since I was salivating over Elegy and Tales from the Thousand Lakes, but the band has come a long way, both evolutionarily and de-evolutionarily.

To be clear, The Beginning of Times is not a disappointment of the caliber that Pasi Koskinen's swansong Far From the Sun was in 2003. The general ingredients of Skyforger are firm in place, between Joutsen's balanced singing and growling and the heightened sense for melody that the band have embarked on since the mid-90s. Unfortunately, where albums like Elegy and Skyforger wrought such melodies into glorious, potent compositions, those of this album seem to simply sail along, never offensive or well structured enough to glean the ear's affection beyond a handful of spins. Often the songs become a little too fruity or happy, like "Song of the Sage" or the vapid "Mermaid", in which both Tomi's cleans and the female guest vocals seem rather lame, and the music returns to the Tuonela era with less than astounding results. There are a few too many 'soothing' songs, like "You I Need" and "Reformation" which don't really add up to the engrossing experiences the band were churning out in the past ("My Kantele" and so forth).

On the other hand, there are some goodies lurking in the album's depths. "Beginning of Time" feels like an Elegy natural, with loads of melodic bombast in the backing vocal arches and the general thrust of the thundering rhythms into the glorious, growled chorus above the organs. "Escape" and "Crack in a Stone" are two of the most catchy songs amidst the 54+ minute length, and I only wish they'd been thrust up towards the fore in place of "Battle for Light", which isn't as compelling. The production here is on par with the past few efforts, wonderfully capturing the varied instrumentation and dynamics of crushing aggression and blissful, accessible melody so beloved in the band's current audience. Lots of synthesizer, piano, clean guitar passages, and multiple vocal styles provide for an appreciable, kinetic backdrop, and they treat their lyrics and history with the love of natural born sons, looking backward to propel forward. Ultimately, this is least impressive album with Joutsen at the helm, but it's nothing to scoff at, and earns a few needed points late in the game to squeak by.