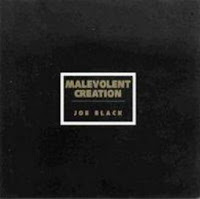 Four albums deep into their career, Malevolent Creation and their newly adopted Pavement imprint obviously found it was time to assemble some random audio odds and ends and foist them upon an unsuspecting audience. Joe Black is ultimately a fan package, I just can't think of a fan who would ever appreciate it, since the band still seemed miles away from maximizing the potential they wrought on the debut The Ten Commandments, having since released three albums of decent but lesser quality; and nothing on this compilation even comes close to matching those in execution. Demo material, a cover, some remixes, some unreleased tracks, basically like taking your garbage out a day early and trying to sell it off to a neighbor before the dump truck comes along to claim it.

I wish there had been some undiscovered gems in the selection, but sadly we've got no such luck. "Joe Black", "Self-Important Freak" and "Sadistic Perversity" are all pretty predictable pieces that weren't good enough for Eternal. "Joe Black" itself feels like a mix of Sepultura and Morbid Angel without memorable riffs, while the others are admittedly more brutal. Then we've got the 'remixes' of three other Eternal tunes, electrified with cheesy house and jungle beats not unlike Fear Factory's rather pathetic Remanufacture album. I am not at all opposed to electronica or industrial music within the metal spectrum, having written and recorded such styles for about 15 years myself, but there must be something better one can do than just tack on some puerile, stock beats and lame ghetto samples, then mix the chugging and guttural vocals over them. "To Kill" has a mildly more manic atmosphere than either "No Salvation" or "Taste the Agony", but it's no more impressive than the worst KMFDM song you've heard.

Next, a demo recording of "Genetic Affliction" which is little more appreciable than that found on the band's 1993 album Stillborn; and a cover of Slayer's "Raining Blood", also recorded when they were tracking that album but not released with it. I can understand why, as it's a dull manifestation with only the echoed grunting offering any individual atmosphere, but it's not suddenly more interesting just because it's found here. Lastly, we've got what might arguably have been the best draw on the disc, a reissue of two tracks from the band's 1990 demo. You get "Remnants of Withered Decay" and "Impaled Existence" ("Decadence Within" is strangely absent), both decent at the demo level. But then, both of these were also rerecorded for The Ten Commandments, and in my opinion better there, so the mileage once again varies.

So why bother with Joe Black at all? Don't. It's simply not worth it. Not a single mix found on this album is superior to its official studio counterpart, the cover is bland and the techno remixes are cheesy as fuck. Malevolent Creation might have slapped their two demos together with some covers, live tunes, and the unreleased Eternal material for a better result aimed at the completist or collector. This was devoid of any thrills whatsoever, and did not bode well for the band's future.