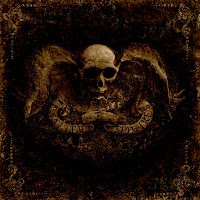 Back for seconds after their solid if unremarkable Cultus Nex, Finns Sacrilegious Impalement represent the widespread devotion to the traditional black metal aesthetic just as well as any hopefuls out there in the deep underground. Drawn from equal parts influence of all of the major Scandinavian scenes (you'll hear some Swedish and Norse appeal in addition to the Finnish strains of a Barathrum or Horna), they're also well enough versed in variation that they don't bore the listener to tears. Proficient musicianship, a strong presence in front man Hellwind Inferion's dominant, hoarse delivery, lyrics of sadness, sacrilege and isolation, and a brazen production which takes the listener head on through its trials and torments.

So why doesn't II - Exalted Spectres bowl me over? This is simply just another of those cases of having been done before, in particular the band's faster fare ("Blessed to Resist", "Wolves of the Black Moon"), which I am hard pressed to distinguish from hundreds of other bands along the same general lines. Now, that's both a strength AND a weakness. The Finns do not claim to be reinventing the wheel, simply driving it into the cracked, burning pavement of the Abyss until it is destroyed. You know what you're getting intro (a song unto itself) simmers into existence at a mid paced gait, but once "Blessed to Resist" hammers forth, the album seems to immediately elevate in derivation, rapid and rushed, without any inherent intrigue. To be fair to the band, they do mix things up deeper into the track list. "Aletheia" is a tranquil menace delivered through sequences of pensive, clean guitars, and "Grand Funeral Convoy" also takes its time with the listener rather than blasting forth towards monotony.

Even these diversions, however, do not necessarily grab the attention front and center. Exalted Spectres is passable background noise, competent enough that I'd never write Sacrilegious Impalement off entirely, but the band's production, tone and aggression easily trump their ability at songwriting. Most of the individual riffs are drawn from the well of familiarity, and thus the layered, punishing mood of the album only gets them so far. In the end, I feel like I took away even less than I did from Cultus Nex. That wasn't a great disc itself, but the writing was slightly stronger. If you enjoy your black metal with raw but efficient studio values and a firm grasp on dynamic contrasts, in the vein of say, De Mysteriis dom Sathanas, then give this a try, but this sophomore is not about to turn many heads or horns in the band's direction.