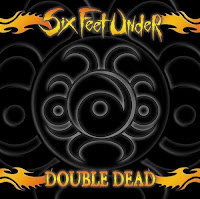 For five albums and about ten years, Six Feet Under had gradually evolved into what must, for all intensive purposes, be the lowest common denominator of US death metal. Pedestrian compositional ability which at best rivals the career lows of a fellow Floridian band (Obituary); failure to even remotely hinge upon the brutality that Chris Barnes made a name for himself with via Cannibal Corpse; the exploitation of cheap 90s ploys like having a rapper guest star (and having that suck) or trendy songs about smoking weed as some sort of promotional element; too fair a share of cover songs choking up the discography; lack of compelling musicianship or quality production values. Essentially this band was the ghetto of death metal's potential.

Still, the band maintained a positive relationship with their label Metal Blade Records, and there were people buying this tripe. Now, there were people buying Insane Clown Posse. Juggalos. People bought Alicia Keys albums. Avril Lavigne. Good Charlotte. I should not be surprised that enough faith was still placed in Chris Barnes to support his vapid bong-addled haze of dull rock aesthetics and death metal fundamentals, despite a career beginning with mediocrity (in Haunted) and then descending into the muck of disbelief. But what the fuck do I know? There was obviously enough interest for him to release a live album/DVD combo pack, to which he would affix some tattoo-like art: enter the Double Dead Redux, 16 apathetic anthems spanning the underwhelming back catalog of 6FU, and about as agonizing as one might expect.

The audio CD and DVD components of this package are culled from two separate performances, with mildly different track lists. The CD itself, recorded in San Francisco in '02, sounds the better of the pair, but that's not really saying much, because it's nearly as ineffective as the band's studio efforts. Basal, 'my first death metal riff 101' material chugged and grooved along with all the splendor of the 90s' most easily forgotten groove metal, spliced with vibrant but forgettable leads which seem to cohesively lack direction. Barnes' blunt throttling throat is bad enough, but when he's alternating with the snarled vocals (as in the first track "The Day the Dead Walked" it becomes downright awkward), and soon enough ("The Murderers") you get an idea of just how cheap and lacking in creativity this band's fare truly is ('it's all fucked up! it's all fucked up!'). I feel like I'm listening to the ravings of a gangsta rap-riddled middle school drop-out after a serious pipe packing as he ruminates over the troubles in the world...

And that's just not what I want to hear. Now, granted, Barnes seems like a nice guy who does indeed appreciate his audience, as he curses constantly to emphasize. He shows this not only in his banter between songs, but also in his balanced selection for the set. There is a measured selection from each of the four studio original full-lengths. From Haunted (their best) comes "The Enemy Inside", "Silent Violence" and "Torn to the Bone", and no surprise that they're the most entertaining of the lot. Warpath is represented by "Manipulation", "4:20" (lulz), "Revenge of the Zombie" and "A Journey Into Darkness". Maximum Violence gets a larger cut: "Feasting on the Blood of the Insane", "Bonesaw", "No Warning Shot", "Hacked to Pieces", and "Victim of the Paranoid"; and True Carnage gets "Impulse to Disembowel", "The Day the Dead Walked", "The Murderers" and "Waiting for Decay". The DVD set is slightly shorter, with "Torture Killer" in place of "Hacked to Pieces", and shot in Minnesota that same year.

Obviously I favor the earlier material here, because it's the only stuff that doesn't completely suck, but the doomy "Feasting on the Blood of Insane" is also one of the better sounding tracks (if you forget the lyrics). It's a fair play length (54 minutes on the audio CD) without growing too bloated or boring, but that assumes you're an actual fan of Six Feet Under, in which case there is a team of anthropologists standing by to monitor your diet, drug use, migratory and mating habits. As far as a fan package, it's not so dire as the Graveyard Classics compilations, and to be fair, Barnes doesn't stink up the set with other peoples' buds (no covers), just his own green and reeking vapors of banal bludgeoning. The sound isn't so hot for a live mix, but the instruments are good and even, including the base, and I've certainly heard worse. I wish I could say the same for most of the songs.