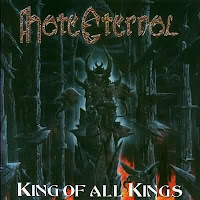 As strong as the case might be made that Hate Eternal are naught more than a Morbid Angel derivative featuring a member of that very same act, their Conquering the Throne debut was nonetheless the most exciting new career flagship since the late 80s and early 90s, when the 'core' Florida bands were writing their most potent and lasting materials. Three years later, with an adjusted lineup, Erik Rutan would return with the follow-up, King of All Kings, sporting an Andreas Marschall cover redolent of Blind Guardian's Nightfall in Middle-Earth, production by Rutan himself, and a boast that little to no editing was done during its creation in the studio. The sophomore is a tense, explosive manifestation which follows rather closely in the footsteps of its predecessor, while upping the level of sheer speed and discord woven through the puerile battery.

This is one intense overdose, and the band takes full advantage of percussion mercenary Derek Roddy, who replaces Tim Yeung. King of All Kings is surely one of Roddy's most unrelenting performances, securing his position as an unflinching hired gun across the wide spectrum of extreme metal, shredding out fills nearly as often as Rutan. And speaking of the ex-Ripping Corpse, Morbid Angel speedster, the burden of riffing falls entirely on his shoulders this time out, since Cerrito had also left the band. The result is a mild lack of the preceding album's firm and Faustian structure, replaced by the weaving of entropic threads below Erik's zipping octave rhythms and blustered, processed lead work. It's a fucking tumult, which often suffers from lack of distinction between tracks, but a few of the tracks like "Servants of the Gods" and "In Spirit (The Power of Mana)" show a surprising strength of musicality betwixt the admittedly flashy and ravenous bombardments of "Beyond Redemption", the staggering brutal of a "Chants in Declaration".

The admixture of velocity and taut thrashing execution was something to be feared, even if it does not always produce the most resonant and durable of riffing sequences. King of All Kings is close to an even further hyperized Fatals Formula to the Flesh, or the faster segments of the divisive 1995 Morbid Angel album Domination, and some of my enjoyment of the latter surely bled forth into my appreciation for this. The most destructive of Hate Eternal's full-lengths, if not the best written. Rutan knew his audience and his weaponry well, and brought it to full bearing on the sophomore, but there are stretches of vapid guitar flatulence and dull bludgeoned vocals that fail to overcome the consistency of the debut. Otherwise, this remains one of their strongest albums. There is much to occupy the ear, as you translate Roddy's superhuman applications and Rutan's terse magnificence into a comprehensible, despotic dialect, and surely it's a more tangible and memorable piece than several of its successors.