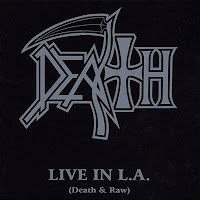 Remaining objective about an album like Live in L.A. (Death & Raw) can be a difficult thing for me While I don't care for the album itself due to the rather miserable track listing, it was released for a decent cause (to help Chuck Schuldiner raise proceeds for his fight with brain cancer) and has at least an audible production which is accurate to the band's performances during this period. It's one of those rare cash grabs which is actually for a GOOD reason, but at the same time it offers fans a long awaited, official live offering. Kudos to Schuldiner for not taking advantage of his rabid fan base many years earlier. He could have released a live album every six months since 19991 and devotees would have gobbled each up like starving robins on a trail of bread crumbs.

As its title implicates, Death & Raw was recorded on the West Coast in December of 1998, when Death was a few months out from The Sound of Perseverance, touring with that lineup (Hamm, Christy, and Clendenin). Unfortunately, this means its heavy on newer material, as we had yet to reach the point where classic metal bands focused on their classics (though for a handful of the faithful, you'd think Perseverance was the Second Coming). It's not all that bad, there are but three new tracks in the set: "Scavenger of Human Sorrow", "Spirit Crusher" and "Flesh and the Power It Holds", but I must say I got nothing more from them than I had on the studio album. Symbolic is more thoroughly represented, with "Crystal Mountain", "Zero Tolerance", "Empty Words" and the title track; while Individual Thought Patterns and Human each get a pair ("The Philosopher", "Trapped in a Corner", "Suicide Machine", "Together As One"). Sadly this leaves only two slots in the 13-track list to cover the first three fucking albums! Yes, the classic DEATH metal albums are represented only by "Pull the Plug" (Leprosy) and "Zombie Ritual" (Scream Bloody Gore). A damned travesty, and I don't care how 'forward thinking' Chuck was, Spiritual Healing is completely absent!

That's a pretty big gripe when wants to experience excitement through a live recording, but recognizing the fact that Schuldiner probably wasn't interested in the least in his older material, I guess I should be happy that even those two made the cut. Or, I would be, if they sounded the least bit entertaining. Chuck was using his more torn throat vocals by this point, sounding almost like a black metal rasp, and it simply does not sound fluid with the formative songs, or even "Suicide Machine". The least affected tracks are those from Symbolic, which are more melodic and sparse enough to bear the shift in his tone; or The Sound of Perseverance, since the vocals sounded similar in the studio. As for the rest of the mix, its raw and functional, but nothing special at all. The drums are rather loud and poppy, and the guitars felt too compressed and distant, though the leads carry through decently. I've already mentioned the vocals, and they sound a bit hacked, and Clendenin's clunky bass lines rarely stand out against the guitars.

Live albums are supposed to be the next best thing to being there, and I can't accurately claim that Death & Raw provides this experience. It's by no means an awful recording, but it leaves much to be desired, more like a glorified bootleg than a legendary live. The 'raw' in the title is no joke, but neither does it benefit Death's sound. As a token of appreciation for one of your icons, to help him battle his life threatening illness, it was worth the coin. You were getting something in return for your labors, a positive idea all around. But as a standalone live release, it just does not cut it, and I found little to no satisfaction in the content itself.