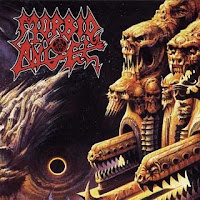 Of all the Morbid Angel full-lengths, from the rightfully acclaimed (Altars of Madness) to the mediocre (Formulas Fatal to the Flesh, Blessed are the Sick) to the sadly underscored (Domination), I feel as if Gates to Annihilation is the most sure of itself. The experiments had been written and performed, the crowd's reaction noted. Deep in their sweltering Floridian bunkers, Trey Azagthoth, Pete Sandoval, Erik Rutan and no-longer new guy Steve Tucker knew that what they wanted to produce, a solid balance of their previous five full-lengths and an atmospheric slug-fest that was perhaps their best at interpreting the cosmic horrors and human isolation that their lyrics produce. Call it a 'broader view' of what such tantamount summonings and rendings in the fabric of space/time would produce.

The very crawling, battering rhythms created through the record forge mental images of long dessicated alien environments. Haunting brutality, twisted spires of rock and other elements that would no longer be scryed upon by the living or the sane. The cover image by Dan Seagrave is one of his personal finest, and in my opinion the best Morbid Angel have featured on any of the full-lengths, trumping even the iconic Altars of Madness. It really makes one sit back, think, and then if he/she thinks too hard, slowly start to lose grasp of reality. In a nihilistic universe of twisted occult aesthetics, Elder Gods stalking their next food source, and untold horrors that the 3-dimensional mortal simply cannot bear, it's really the whole package. Add to that the fact the production is so amazingly well-balanced, dual leads zoning over the intense punishment of the bottom end, and you've got an album forged to KILL EVERYONE.

Stylistically, this hearkens back to Blessed Are the Sick with a touch of Domination, in that it largely operates on a slower, fundamental tempo. Lurching, but so very determined and vast in scale, tunes like "Summoning Redemption" and "He Who Sleeps" retain a curious versatility despite their reluctance to spend considerable time in the acceleration zone. Tucker's voice has truly shaped itself here to become the ponderous bludgeon that can stand in for David Vincent, and the weighted fiber of the guitar tone possesses both a hard edge and a cystic resilience with great depth to it. The leads are exotic, alien sirens which splash upon the lifeless, terrestrial surfaces as if they were birds of prey striking through the vast vacuum of nothingness. In a sense, there is this cohesion throughout the album, from "Summoning Redemption" through the closer "God of the Forsaken", which makes it more difficult to distinguish individual pieces than it would be on Altars or Domination, yet this does not deter its quality.

Any gripes I have with the album are minor at best. For one, I dislike the scratchier, snarled vocals on "Secured Limitations". I feel that they distract me from the overall consistency and it would have been a better experience without them. For another, several of the repetitions of the riffs do come off a fraction too droning and monotonous. Granted, that's half the point of these things, but a few added dynamics would not have hurt the album's case. Otherwise, this is one of the best of Morbid Angel's albums, a dark, belligerent, savvy enterprise which proved beyond the shadow of the doubt that the new lineup was functional and formidable. I'd choose this over Blessed Are the Sick, Covenant, Formulas Fatal to the Flesh or Heretic any day. A poignant harbinger of Armageddons yet unseen.