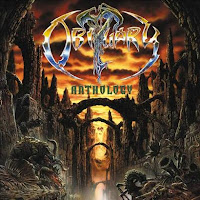 Of the two Obituary collections released by Roadrunner Records, the first of them, 2001's Anthology, is slightly the more favorable. This is due only to the presence of a few unreleased knick knacks amongst the retread waste, a demo track that many might not have heard, and a few minor edits or tweaks elsewhere. When I mention 'favorable', of course, it is only by comparison to 2008's The Best of Obituary, which the band had no say in, but the difference is about as much as being gunned in the balls and left bleeding to death, or a clean and merciful headshot. Most would take the latter. In no way should any human being squander their money on Anthology when there are countless more valuable things to do with it, but if you find yourself held at gunpoint to select one, then this will sting less.

With over 77 minutes of material, Obituary and Roadrunner have conspired to give the listener their money's worth of...what they already have. The 'compilation' element is delivered through a largely chronological fashion, beginning with a demo cut of "Find the Arise" which is a slightly cruddier alternative to the final studio version (Cause of Death). Then its straight to the races, with a chunk of material from their classic albums; Slowly We Rot ("'Til Death", "Intoxicated", "InternalB leeding", and the title track) and Cause of Death ("Chopped in Half", "Turned Inside Out", "Dying" and again, the title track). The wisest among us would stop right there, as these are the only two Obituary albums that really matter to this day, and the surprising neglect of two of the sophomore's best songs ("Body Bag", "Memories Remain") seems rather suspect in the chooser's choosing. But they press on, with three tracks from The End Complete ("I'm in Pain", "Back to One", and AGAIN the title track); three from World Demise ("Final Thoughts", Kill For Me", and of course "Don't Care") and three from Back from the Dead ("Threatening Skies", "By the Light" and another title track).

If Anthology had been offered as a free download or super discounted disc with proceeds going to some charity, the selection itself might not be frowned upon. After all, certain omissions aside, they carve out an adequate representation of what each studio full-length represented, and one can clearly hear the band's 'evolution' towards groovier LCD fare down the stretch. Alas, that is not the case, and this was another major label cash grab (major for metal), Roadrunner ironically churning out junk like this while failing to care much about signing new death metal bands and further supporting one of the genres that got them to the top in the first place. But the band has also included a few bones for the fans that have blown their cash on it, in the form of a cover of Venom's "Buried Alive" (not so bad once the goofy intro is out of the way and we hear John Tardy's grisly howling above the rocking), and a "212 degree Sporadic Mix" of the song "Boiling Point", which is cast in an interesting industrial drumming claptrap, though that's the only thing distinct about it.

So, in the end, even these bonus tidbits are not compelling enough to save the Anthology. Their legendary cover of "Circle of the Tyrants" will probably always remain their go-to tribute to the past, and next to this "Buried Alive" blows. The industrial remix could have been interesting, sort of like the Laibach 7" remixes done for Morbid Angel, but it's as if they just tacked on a campy, alternative beat and left it there. But, fuck, at least there is SOMETHING present which the death metal fans did not already own. A few of the other tunes are supposedly alternate recordings or edits, but fuck if I could notice or care about the differences. Even the most rudimentary newb or poseur would be better served shelling out the cash for Slowly We Rot and Cause of Death, or the 2003 'Two From the Vault' double-pack, than this currency-craving detritus.