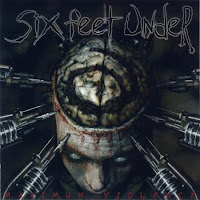 It takes only about 90 seconds of the first track “Feasting on the Blood of the Insane” for one to start laughing uncontrollably at the hip hop timbre inherent within Chris Barnes’ McGruff the crime dog gutturals, but in about half that time you’ll realize that there is a difference in the third Six Feet Under long player: it no longer sounds necessarily like a half assed Obituary. Yes, Allen West has left the building, replaced by another Florida scene luminary in Steve Swanson (ex-Massacre). Granted, there is still a lot of the same hook line and stinker primacy to the writing here, “Feasting…” and a few others laden in the same lame grooves that dominated the treacherous sophomore Warpath, but there are some noted improvements that place it beyond its predecessor in overall quality…

First, the production is simply superior. Brighter, bloody, like a fresh bruise or a newly broken nose. The riffing is just as idiotic as always, with the complexity of a third grader’s packed lunch, but Brian Slagel and Chris Carroll have succeeded in making this record sound richer than the first two full-lengths. Second, there are two songs here that are arguably GOOD: “Bonesaw” and “Short Cut to Hell”, both loyal to the band’s shared influence of early Death and Obituary, with some central rhythms reminiscent of what you’d hear on Scream Bloody Gore, Slowly We Rot or Leprosy. I can’t vouch for the lyrical aspects, but they’re not quite so dumb as the gangsta death anthems here like “No Warning Shot”, in which Barnes sings about shooting cops, countering his gruffness with an unintentionally hilarious snarl during the chorus: ‘Die, motherfucker, die, die’.

A few of the other tunes straddle the line between decency and regret: “Brainwashed” and “Torture Killer” coming straight to mind (interesting that Barnes would later perform guest vocals for a band named after the later…paradox?!) But these are ultimately as forgettable as the rest. No, “Bonesaw” and “Short Cut to Hell” will have to do for the highlight reel here. Unfortunately, they have chosen to clog up the plumbing with a trio of covers that are estimably as lame as those they have previous spurned us with. Thin Lizzy’s “Jailbreak”, Iron Maiden’s “Wrathchild”, and Kiss’ “War Machine” are all given Barnes’ blunted reconstructions, and they’re exactly as you are picturing them in your mind: lifeless near-parodies with no major difference outside of the gutturals. Hell, the guy’s been hammering us with this idea since “Zero the Hero” on the Hammer Smashed Face EP…

…and he will continue to do so, on the band’s next full-length release, the first installment in the unfortunate Graveyard Classics series (who the fuck green lit that, out of curiosity?). But for all its flaws, Maximum Violence is probably one of the better 6FU albums in the long-run, at least as far as its original content. That’s not saying much, I realize. Haunted is a stronger album overall, and there is no reason anyone possessing a shred of sanity should actually spend money on this (not even I, who got the promo for my old Xerox zine), but it doesn’t reek nearly as strong as the wretched work it has the task of cleaning up after.

Verdict: Indifference [5/10] (face to face with the monster of hate)