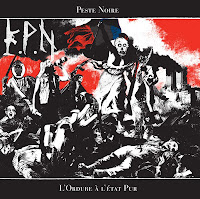 While its song structures prove more epic and substantial than those of Peste Noire's last effort, Ballade cuntre lo Anemi Francor, their latest album L'Ordure a L'etat Pur is every bit as eccentric and scatterbrained as nearly anything the French oddity has produced to date. Famine, or shall I say La Sale Famine de Valfunde has crafted another startling absurdity, this time through his own new imprint 'La Mesnie Herlequin', for which he's also managing a record store and 'zine. As usual, expect the unexpected as you're listening through this, for while the prior album might have shown some degree of restraint in its core, black metallic-inclined tracks, this albums lacks the uncanny vignettes of its precursor, incorporate the abstract and versatile directly into the loaded, bizarre nationalist hymns.

Strange as it might seem, my favorite constituent within a Peste Noire album is ever the guitar tone, and I was certainly not unsatisfied with the natural, humble authenticity of the riffing in "Casse, Pêches, Fractures et Traditions" or closer "La condi hu". A solid balance of distortion, fuzz and creativity. As much as the band might seem to get off on its own ridiculous parameters, its the actual metal that shines. However, this album goes all over the place, both in its more overt bastardizations of genre, like the cheesy techno beat fueled "Cochon Carotte et les sœurs Crotte" with its eerie sampled perversions and Famine's rank howlings; or the first segment of "J’avais rêvé du Nord"and its pulsing ghetto beat. What's fascinating is that the elements which should absolutely destroy any semblance of sanity or seriousness are rather fluid alongside the metallurgy. This is a man capable of selling you any used lemon on the lot, because he's just that good of a composer of these dynamic and laughable contrasts.

I do feel that some of the five pieces here feel 'padded', a bit too thick with ideas for their own good. It's interesting to explore a 10-20 minute tune when you're constantly being bombarded with such surprises (rhythmic bird calls? They're in here), but some of the actual riffing suffers. I greatly preferred "Casse...", "La condi hu" and "Sale famine von Valfoutre" to the other two tracks, but there are bits of each that stand out against the sum experience. Also, the production to this album is quite cleaner than any of the prior full-lengths. Not exactly a drawback, per se, but if you fancied the raw aesthetics of Ballade cuntre lo Anemi Francor (which I loved), then you might be a little reserved. I can't say I enjoyed this quite so much as the last two records, but nonetheless its a bastion of risks that yet again proves its worth, that Famine is one of the most distinct voices upon the European black metal landscape. He will continue to be loathed or adulated based on the listener's relative political and social beliefs, but there's simply no denying the charisma he infuses into his releases. L'Ordure a L'etat Pur might not have entirely stuck so glue-like to my ears and conscience as its predecessor, but I can promise that its a trip you will not be taking elsewhere.