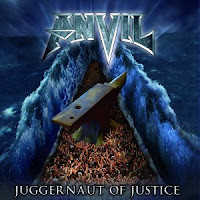 Not a lot of bands hang out for 30 years while success eludes them, so it’s a bittersweet triumph that Anvil have been ablaze lately, due largely to their 2008 documentary Anvil: The Story of Anvil. The film may not have brought the band to the attention of a vast audience with no appreciation for traditional metal, but it brought them to the attention to other bands, a few of whom have been taking them out on tour and attempting to give the band the shot they always deserved. Whether or not this works out is largely irrelevant, because the Canadians have in general produced quality records and have no intention of stopping until the day they drop dead of road burn.

Even if This is Thirteen hadn’t been accompanied by the film, it was still a solid effort from a band who have no need to re-integrate their roots: they never abandoned them. The worst that could be said for Kudrow and Reiner is that they’re guilty of a few cheesy, pedestrian lyrics and predictable riffs that seem mere mutations of those that have tread the same grounds before, from Anvil themselves or a myriad of other heavy metal outfits (Judas Priest, Accept, and so forth). But just as with its predecessor, the Canadians prove that great production and the fires of perseverance can transform what the metal audience might take for granted into pure, passionate gold.

Juggernaut of Justice, the band’s 14th album, is loaded with such qualities, the band writing at nearly the same level as their classic 80s stretch (Hard ‘n Heavy through Pound for Pound, I enjoyed them all). Enormous, brazen guitar tones and swaggering licks are legion throughout this beast, from the fist pumping title track opener to the raging “When Hell Breaks Loose”, mutes thundering at a mid to fast pace while melodies soar across the landscape. A very Running Wild feel to this one, and you’ll hear no complaints from me, but there are better still! You might not feel that a song called “Fucken Eh!” could amount to much, but it’s superb, Glenn Gyorffy’s thick lines strutting below an escalating chorus. If that song wasn’t enough to bring the roof down, “Turn It Up” and the crusher “Conspiracy” will surely make short work of any shingle or support beams, and the bonus cut “The Station” is likewise rich and memorable.

Like any Anvil offering, there are a few tracks whose obvious lyrics are seasoned with a bit of excess Velveeta, and one such here would be “New Orleans Voo Doo”, another of the band’s ‘superstition’ anthems much like the title track for the previous effort. The doom-like, predictable “Paranormal” follows in the same path. Granted, the former has a nice lurch to it not unlike their staples “Metal on Metal” and “Concrete Jungle”, but it’s not among the stronger material here. But when the rest of the writing is this good, and there isn’t a single Anvil album in history without such a silly side, its easy to overlook.

No surprise that the album sounds so damned good, with Kudrow showing almost no age to his workmanlike canting aside from a dearth of old school screams. Reiner is solid as brick, and it’s good to see the band carry forth as a three piece, the same concrete trio that have stuck it out since 1996, half-way through Anvil’s history. They might not have scored another collaboration with the legendary Chris Tsangarides this time, but another veteran, Bob Marlette, is able to draw forth a great deal of power and clarity to keep them on top. Myself, I might always be stuck in the 80s. I’m not hearing anthems at the same level of a “Metal for Metal”, “Mothra”, “Blood on the Ice”, or “Forged in Fire”, but for a band this deep in, one can only marvel that they retain such bold and unabashed vitality, such loyal identity.