Hate Eternal - Phoenix Amongst the Ashes (2011) 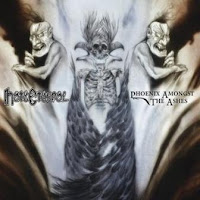 While Hate Eternal's fifth album does not necessarily manifest the titular creature as far as its glorious qualities, it is undoubtedly the strongest album Erik Rutan has released through this outlet since the 1999 debut, Conquering the Throne. Retaining the services of Jade Simonetto's intense drumming ability, adding former Monstrosity axegrinder J.J. Hrubovcak to the bass position, he's assembled a formidable lineup capable of nearly anything within the brutal death spectrum. Overall, the level of competence is staggering, and Rutan continues to write in his post-Morbid Angel vein: predictable yet destructive blasting hurricanes of straight death interlaced with intricate, blockbusting grooves and just enough melody to keep the listener's ear affixed beyond merely the thundering catechism expected.

Phoenix Amongst the Ashes is an album of splatter and dynamics, and while its almost incessant in terms of the exhausting level of blasting and double bass, the riffs range a little broader than its predecessor Fury & Flames. "Haunting Abound" is like feeding industrial strength Voivod dissonance through a Morbid Angel meat grinder, while "Hatesworn" feels like an outtake from Domination, all tremendous grooving curvature and cranial numbing footwork from Simonetto that makes one question the guy's humanity. Faster fare like the title track has a dense layer of fibrous melody, subordinate to the tireless slaughter of the rhythm section, and "The Art of Redemption" will spin heads through its clinical, spiraling storm of higher end notation. I was also absorbed into the counter grooves and chaos of "Lake Ablaze", and the opening one two volley of "The Eternal Ruler" and "Thorns of Acacia" is vicious enough to get most of the naysayers back on board that negative reactions to the prior pair of efforts.

Truly, this is about as intense as the human form can perform in this genre without their bone structure dissembling, but there are still some drawbacks. For one, the vocals are never quite interesting. Rutan is heaving out the same Benton/Vincent-like gruffness he has clocked in since 1999, offset by some cheesy and forgettable snarls. Neither voice possesses the malevolent charisma or resonance to adequately mirror the whirlwind compositional ability. For another, despite the obvious creativity the trio have expressed here, there are still passages of banal aggression, with less interesting riffs, that feel almost as if they're just inserted to fill up space and give Simonetto an extended workout. All told though, the excellent production of the album and the relentless ability of the musicians involved make Phoenix enough of a success that the band can once again be considered a contender for the hostile, vacant throne of Floridian obliteration.

My thoughts have been: Webster was better on bass/was mixed better on F&F; and agree with you on the vocals - too much gruff Rutan and not enough variation compared to some previous albums.

Other than that I really enjoy the album, I'm a sucker for this stuff I guess. :)