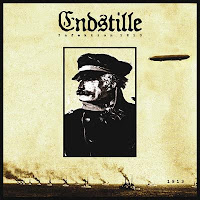 The previous Endstille album, Verführer, left me with a favorable impression of the German band's evolution. Taut and refined, there was this uncanny knack for generating a sublime melody against the razor sheen of traditional chords redolent of the Norse and Swedish black metal pantheons. For Infektion 1813, they have continued this tradition, and while there are no songs with quite the same impact as, say, "Of Disorder", there is still quite a wealth of subtlety grafted against the snappy blast work and driving rhythms. Former rasper Iblis has since left the band, but they've brought forward a scene veteran in Zingultus, who many will know from German standards Graupel, Graven, and perhaps most importantly for fronting a few albums by the late, great Nagelfar.

I won't attest that his presence is greater or lesser than that of Iblis, but his vocals bear a more full bodied torment, and he has no problem fitting into the material. Speaking of which, I feel that Infektion 1813 is front loaded with some of its better pieces, the straightaway "Anomie" with its dense threads of torture, tiny pangs of melody infused into the blast; and "Trenchgoat" (ha ha ha), a testament to controlled savagery. Neither offers much variation in its structure, but then, this is not a band who pride themselves on such a strategy. No, they choose to beat you bleary with their centrifuge of snarling force and then allow your imagination to work upon the target rich environment of ambiance created through the sheer repetition and simplistic melody. When it works, as with 3-4 of the tracks here, it creates a hypnotic, lulling effect of abandon.

Endstille is not all monotony, of course, and they mix it up a little by incorporating gang shouts ("The Deepest Place on Earth") and narrative ("Endstille/Völkerschlächter"), not to mention some deeper, driving black grooves via Darkthrone ("Bloody H/The Hurt-Gene"). Lyrically, they seem to explore not only the usual suspects of Satanism and the occult, but also delve into the fascinating majesty and conflict of their country's history. I've always gotten the feeling that the band is smarter than they let on with such simple and predictable songwriting, and I admit I wouldn't mind hearing some more variation the next time out: Infektion 1813 has slightly more range than its predecessor, but I was never quite so mesmerized by the content. Still, they've not put out a bad album, and if you're deeply fused to the underlying ethos of the genre, spiked with just a little something extra, you may well be pleased with its controlled vitriol.