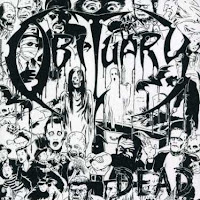 Dead is one of two long awaited live entries from the Florida elite to be issued in 1998, the other being Deicide's When Satan Lives. This was recorded the year prior at the Axis in Boston, when the band was touring up a storm for their Back from the Dead full-length. It's also curious in that I am pretty damned sure I was at the actual gig, though the half dozen times I've experienced Obituary through the years have admittedly muddled together in my brain. Regardless, this is quite an effort, with 16 tracks and excellent standards of production that should surely satisfy the avid follower of the band's carnal creations. Powerful, thick guitars, solid drumming and John Tardy giving a performance worthy of any studio effort. About the one element falling behind in the mix would be the bass, but it's not that you can't hear it: the instrument has simply never been dominant in the band's tone. As for the leads, they sound impressive, standing out on stage even more so than they do from the studio efforts.

I must begrudge that a few favorites of mine are missing from this set list, namely "Body Bag" and "Memories Remain" from Cause of Death, and about half the worthwhile content of their debut Slowly We Rot, but what remains is an entertaining mix of the band's earlier death metal and then their more hardcore and groove-infused 90s fare. The recent selections like "Platonic Disease", "Threatening Skies", "By the Light", "Download", "Rewind" and "Back from the Dead" offer a sizable exposure to their latest full-length outing Back from the Dead, danceable enough to whip the largely hardcore crowd into a frenzy; while popular World Demise tunes "Don't Care", "Final Thoughts" and "Kill for Me" are also included. "I'm in Pain" is thankfully the sole track from the mediocre End Complete, and the remainder of the set is a delight hearkening back to the band's pinnacle of achievement (1989-1990); Cause of Death represented by its title track, "Dying", "Chopped in Half" and "Turned Inside Out", all of which sound fucking amazing.

There are but two included from Slowly We Rot, but oh, how well the title track is placed at the conclusion of the set, its pungent and doomed grooves inciting violence throughout the audience. The last is "'Til Death". Naturally, I would have paid good money for an ENTIRE set list culled solely from the first two full-lengths, but I feel that the band at least captured some of their catchier moments from their entire body of work (to that point), and you're getting an hour of solid Obituary which was accurate to their obvious polish. They also went all out for the release, with a nifty black/white cover image and a mix job courtesy of Andy Sneap (ex-Sabbat UK), who had by 1998 begun to establish himself as a metallic go-to, though usually for his studio efforts. All told, Dead is even better sounding than it was to attend one of the band's concerts with the p.a. and amplifiers blasting into your eardrums. Most of the tunes are quite close to their studio counterparts, so there's not much improvisation or embellishment, but its certainly a decent live recording for this genre.