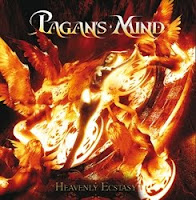 Norway's premier progressive metal act peaked in 2005 with the stunning Enigmatic: Calling, a spotless album that would serve to help modernize and define its genre in a new era of possibilities. Sure, it was as sugary and shining as the glossiest of candies. But what an amazing confection, well balanced between lightning riffing, gorgeous melodies and the precision pitch of Nils K. Rue, one of the best in the business, a clear choice to occupy the throne left barren by the likes of Geoff Tate, James Labrie and Ray Alder. I have not stopped spinning that album to date, so when it's followup God's Equation turned out t be a bit of a disappointment, it was not unexpected. How does one trump perfection? You put up an equivalent statement of quality or you shut up.

Well, six years later, Pagan's Mind have returned for their 5th album, and though it's perhaps not on the same wavelength, it's thoroughly enjoyable, and one of the best of its type I've heard in some time. The Norsemen retain their affinity for cosmic, wide reaching subjects of beauty in and out of the human sphere, abstractions upon religion and so forth, but this once again creates the perfect sort of gleaming, memorable fare that prog/heavy metal nerds sporting erections throughout the 80s and 90s would have killed for. Not a song goes by without some ear catching phrase or riff, and even at its worst (the rather vapid hard rock grooving incorporated "Into the Aftermath"), the band can craft a chorus that will send shivers through your nerves and a smile upon your face. There might not be any particular tracks that could compete with the elation of "Enigmatic Mission" or "Celestial Calling", but most of them come pretty damn close, and that is saying something...

Heavenly Ecstasy opens with a real burner, "Eyes of Fire", with a few thick exotic grooves to whet your anticipation for Rue's pristine presence, before the chorus and its tangible emotional levity. Cut to the great shredding and busywork of Jørn Viggo Lofstad in the bridge, and you're once more taken on an adventure. A few of the simpler, groove riffs are admittedly pedestrian, but encased in such enormous, clean production it's difficult not to feel some power. But this is far from the best track here: "Intermission" is a glorious, uplifting charge with a lot of screaming and a casual balance of aggressive chugging and moody synthesizer in the verses, while "Revelation to the End" sees the band experiment with Halford-like power metal screams and a chugging vortex of momentum with another voracious chorus. "Follow Your Way" and "The Master's Voice" are the sort of dreamy fare I would love to hear Dream Theater crafting these days, but then, Pagan's Mind are a far more straightforward act who jam and fuck around less. "Never Walk Alone" is yet another shocker that belongs on a highlight reel of their discography.

Really, the only song I completely discarded was the ballad "When Angels Unite", but really, all of these bands force something like this upon you. For what it's worth, it's not poorly written, just all too generic feeling and drippy. I also mentioned the grooves in "Into the Aftermath", but that still has a chorus you'll want to check out. In all, Heavenly Ecstasy is precisely what I want to hear out of this band: practiced, professional, polished execution and masterful musicianship that caters to both the virtues of restraint and the yearning of the ear, especially when the band fuses the dreamy 80s synthesizer prog with the charging guitars and Rue's siren-like prose. If you've appreciate anything Pagan's Mind has released in the past, or you'd be interested in hearing Stratovarius or Sonata Arctica done better, with far less wank, then these Norwegians once again have your back.