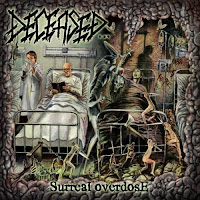 Deceased are one of those rare bands which never seems to release anything even hinging on a bad album, at least when it comes to their full length studio fare. The most obvious reason is that King Fowley and his cadre of metallurgical historians have their minds and fingers upon the pulse of good taste, the lure of nostalgia and yet no crass committal or constraint to merely sounding 'old school'. Then there's also the fact they've been developing their instrumental chops for decades, and know how to right a damned good conceptual song, whether campy or genuinely intriguing. Surreal Overdose might only be the band's sixth proper studio album in over 25 years, but you'd be surprised at just how much it brings to the table: Everything.

Nothing is off the table here if it can contribute to a good song. From the band's traditional death thrashing aggression to the liberal dosage of traditional heavy/speed metal cast both in the core rhythms, dual melodies, to the time and effort placed into the lyrics, to Fowley's distinct vocals, both dour and emotional in each captured phrase. Deceased represents the very best of what any modern (or surviving) metal entity can achieve: quality compositional ability that manages to pay a wonderful compliment to all of its influences, but at the same time sounds incredibly fresh and important, as if it had just stepped off the pain train to convey your suffering. Cash on delivery. Those who are fond of the band's past works Supernatural Addiction (2000) and Fearless Undead Machines (1997) are in for a particular treat, because Surreal Overdose is every bit as memorable, if not more so.

Each track distinguishes itself very well from the next, with only modest similarities in the vocals or the volatile pacing. There are a good number of full on, raging relics like "Skin Crawling Progress" which draws upon everything from Voivod to Venom; or the uplifting intro to "The Traumatic" which quickly devolves into a paranoid instilling hostility (dig the belligerent drumming passages that cut through the volleyed verses); or the scathing, morbid thrash that heralds "In the Laboratory of Joyous Gloom". But they are also some strategic breaks in the action, if no less hair raising, like the clinical spikes of titillating melody that inaugurates the track "Cloned (Day of the Robot)" or the subtle, haunted texture of the guitars in the instrumental "A Doom-Laden Aura" which sets up the finale, "Dying in Analog" (what a title there). With the exception of that instrumental, there isn't a single cut here void of at least 4-5 breathtaking, exciting riffs, and even the leads flow with electrical enthusiasm.

What's more, Surreal Overdose possesses what must be the best production of any Deceased full-length to date: the guitars even more brazen than Supernatural Addiction, the rhythmic balance meticulous, the vocals hovering at just the proper level beyond the asylum window. It blows the previous disc As the Weird Travel On clear out of the airlock, in both quality and the actual sound. A love letter to the psychological breakdown of all humanity. In summation...what a rush! You don't get an album from these Virginians very often, so when you do, it's almost always guaranteed to keep you occupied for many listens. Surreal Overdose is no exception, and in fact, and I'll go so far as to say it's the best thing the band has ever stamped their logo upon. These are men who love metal. METAL. It's not a hoax. It's not a joke. It's not a laughingstock for suits and hipsters and 'cultured' fuckheads. If you can say the same for yourself, then you're about to become one album richer.