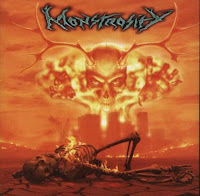 Though the band had only been three studio albums deep when it was released, and might have been better off waiting for more odds and ends to accumulate before unleashing it, Enslaving the Masses is at least the sort of Floridian death fan package which doesn't feel like some greedy ex-retiree banker somewhere in the 'Glades is laughing his hairpiece off at the purchaser. Manifest through indie imprint Conquest, who Monstrosity will remain with for some years, the collection gathers a few objects of desire that the rabid fan or completist would probably want to get his/her hands upon, in addition to a few that really don't matter one way or the other.

There are two discs here, the first of which contains various studio rarities from the band's early history. The most important of these are the Horror Infinity (1991) and Slaves and Masters (1994) demos which feature George 'Corpsegrinder' Fisher in the vocal booth. Granted, all of the tracks from both were re-recorded for their respective albums (Horror Infinity material wound up on Imperial Doom; Slaves and Masters on Millenium), but as usual it's nice to own original versions if you're into the more rugged sounds. Both of them fare well enough, though they pale in comparison to the studio full-length versions. Rounding out this disc, also, are five alternative mixes from the Imperial Doom sessions: "Imperial Doom" itself, "Ceremonial Void", "Vicious Mental Thirst", "Final Cremation" and "Darkest Dream". These actually sound decent, a step in quality above the demos, but not enough to supplant the previously released incarnations.

As for the second disc, it consists of 13 live tracks culled from various dates in the South (Alabama, Georgia, Tennessee, etc), with the band's newer vocalist Jason Avery. Having seen the band during this period, I can attest to their tight level of brutal execution in this venue, but I can't vouch for the sound of these recordings. The rhythm guitars are rather repressed in the mix, which is sad since they stand alongside the drums as the band's main feature. The leads are a bit louder, and the vocals and drums are balanced well, but the rhythms and bass are largely buried, so it's not that consistent of an experience. As for material, it's pretty heavily in favor of their third album In Dark Purity, which makes sense with Avery on board: "The Angels Venom", "Perpetual War", "Hymns of Tragedy", and of course their cover of Slayer's "Angel of Death" which was a staple for them, revving the crowds up. However, they do throw a few older tunes in like "Horror Infinity" and "Imperial Doom" to round it off, and Avery handles them efficiently.

So, in all, you're not really getting anything impressive here or that you couldn't already find in a superior format throughout the previous Monstrosity full-lengths, but at least it helps you collect the demos on a CD. I might have preferred that they include their two singles here as opposed to the alternate studio mixes, but then, the contents of those are just as redundant as what wound up on the final product. Also, the live material definitely leaves much to be desired. Enslaving the Masses is not necessarily worth the money unless you can snap it up dirt cheap or you insist on having everything the band releases (including bids for their underwear on eBay), but rest assured that its not complete ripoff dreck like some of the label-spun schemes out there. Of course, if you don't already own their full-lengths, then any one of them would prove a more suitable return for your investment.