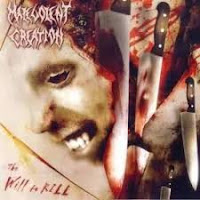 As cliche would have it, the apple does not often fall far from the tree. When that tree is Malevolent Creation's back log of reasonable riffing onslaughts and street stalkings, then its fruit must bear fists of frenetic violence. The Will to Kill is the band's 8th studio album, and frankly not a whole lot different than a number of their previous offerings: The Ten Commandments (1991), Retribution (1992), and Envenomed (2000) all come to mind as direct references to the songwriting. Simplistic old school speed pickings parsed with concrete chugging sequences bent on snapping marrow. This album marks the debut of Kyle Symons to the fold, after Brett Hoffman would once again take a leave of absence from the lineup, but unlike Jason Blachowicz who fronted the albums Eternal and In Cold Blood, Symons is quite close to Hoffman in his stark lethality.

The Will to Kill is essentially your 'stock' Malevolent Creation album. Tight performances all around, and a few snippets potent enough to whip your ass into a frenzy, but very little to write home about, and even less to look back upon. There are a handful of tracks I admire: "With Murderous Precision" seems to me what Slayer might manifest if they took a slight turn towards a more brutal death/thrash hybrid, with a central riffing momentum that would have been a solid match for any of the Bay Area gurus' 80s efforts. "Assassin Squad" balances a deadly clinical precision with pummeling breaks that catapult the listener into the pit before the dense thrashing of the bridge and its snaking, feral lead. "Superior Firepower" is another machination of high paced warfare, conjuring ample tension and release through its barbaric notation, and the closer "Burnt Beyond Recognition" is also nothing to limp out on, about as straightforward and sadistic as this band has ever been.

Sadly, like so many of their releases, there just doesn't seem to be enough to launch it to the upper echelon of memorable death metal classics. The first handful of track possess the same canter and brutality of their peers, but they never serve up even one riff that to stake my attention, and later there are tunes like the moshing "Divine and Conquer" with promise potential and then deliver about 50% empty, filler riffs. I think Fasciana and Barrett do a good job of capturing the pernicious pace of 80s thrash (Slayer, Dark Angel) within the more bludgeoning context of Symon's vocals, while Justin DiPinto floors the listener with his muscular expedition. But at the end of the day, I don't just want my ass kicked in such predictable fashion, I want it done with a subtle malignancy, a shred of nuance and distinguished horror regardless of whether I'm listening to tech, slam, old school death, what the fuck ever. The Will to Kill does not peddle such wares, it remains too straight on its slaughter-course, with no element of surprise and very little enduring extremity. Better than a Stillborn or In Cold Blood, but not among their strongest outings.