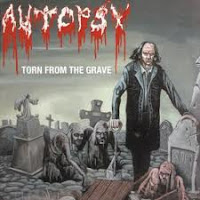 Tyler Durden really had it right, didn't he? Selling the ass fat off rich old women back to them as soap? So too did the record industry of the emergent 21st century, cashing in on 80s and 90s death metal gems, much as the RIAA and its constituents and predecessors had done for the past 30+ years in rock, pop, and other mainstream musical outlets. The old 'Greatest Hits' fiasco, riding high to bait a new millenium of suckers. Californian godfathers of the grotesque Autopsy had been yet untouched by this mass scam, having only had a few discs of unreleased material (demos, live gigs) put out through the imprint Necroharmonic, but it was only a matter of time before Peaceville would realize they were sitting on a goldmine in the band's back catalog, and Torn from the Grave would be torn from the archives, packaged in some thrifty cover art and foisted upon the masses who by this point might damn well have grown tired of Abscess and desired their beloved carrion eaters Autopsy back in their authentic incarnation.

I would have loved to think Chris Reifert and crew were above this sort of treatment, the icons of the underground that they've always been, loyal to a fault, but alas, their 'Greatest Hits' arrived. Like Obituary's Anthology, this is admittedly a substantial collection with 27 tracks and 71 minutes of material, but 22 of these are lifted straight off the studio releases through Peaceville (1989-1995). Most were culled from the four full-lengths, with Mental Funeral getting the royal treatment of six selections ("Twisted Mass of Burnt Decay", "Fleshcrawl", "Slaughterday", "Torn from the Womb", "Dark Crusade" and the title track), and the others all getting about 4-5 each. Yes, even Shitfun has been represented ("Brain Damage", "Blood Orgy", "Bowel Ripper" and "Humiliate Your Corpse"), but this is thankfully at the end of the disc so you could stop early if you did not want to once again exposure yourself to its underwhelming content. The band's earlier EPs are also given proxy here: the title track from Retribution of the Dead, the title track and "Squeal Like a Pig" from Fiend for Blood, so no gravestone is left unturned from the band's 'official' discography of the period.

The selections are decent, I suppose, but utterly worthless to anyone who already owned the original recordings. As I've said many times though for similar collections by other bands, the few and the proud Autopsy fans (this was before the band's massive internet popularity resurgence in the 21st century) were very likely to have most of them, even the EPs which had been included on CD re-issues of Severed Survival and Acts of the Unspeakable. For these begrudged stalwarts, the value of Torn from the Grave must lie in its alternate recordings and live treats, no? The "Robbing the Grave" and "Shiteater" performances included here (from California and New Jersey, respectively) are also available on the Necroharmonic live compilation Dead as Fuck (2004), with many more, so they're easy to skip here in favor of a more solid experience. The other performance track, "Service for a Vacant Coffin" from Germany in 1990, is decent, but probably also available on a CD re-issue or bootleg. "Ridden With Disease" is included from the Critical Madness demo (1988), but then you can get both of the band's demos on the comp of the same name (Ridden With Disease) that was already issued. That leaves "Funereality", which is listed as from the Vol 4 Peaceville compilation, but is also on Acts of the Unspeakable...

So you can sort of see where this is going. Nowhere. Another sanctimonious waste of scratch being peddled 'because it can be', to pad pockets and be forever consigned to used record bins or the unstirred shelves of collectors, buried in dust. Not even this sacred cow would be exempt from such molestation, and I'd highly recommend that it be forgotten, and that the Autopsy aspirant, the most likely candidate to be pulled under this rug, spend his coins on the band's first three albums, and welcome himself to manhood.