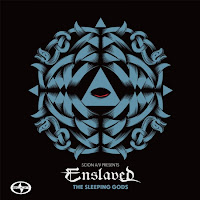 Yes, yes, I can hear it now, an Enslaved background track for some sleek, fanciful automobile commercial, and the cries of outrage and 'selling out' by the cavern dwellers who have likely already hated the band since they released Frost. Don't waste your time with such. The Sleeping Gods is every bit as wonderful and worthy of enormous replay value as the band's past two full-lengths, and the onus that it costs nothing should not dissuade you from checking it out. The five tracks show a vast array of variation that might damn well attract listeners from the band's various 'phases' of progression. "Heimvegen" is a tranquil, melodic romp endowed with a blissful synthetic, orchestral backdrop and cleaner vocal tone; placid until the wonderful eruption of percussion in the bridge above which the hoarse snarling ensues in the desperate, trailing guitar melody.

"Alu Misyrki' might be the biggest surprise, a storming old school black punk injection slathered in raunchy vocals, pretty close to what Darkthrone were writing for The Cult is Alive or Dark Thrones and Black Flags, only cleaner and swerving into tidier, progressive pastures (I LOVE the backing guitar melody around 1:10). Then, the Norwegians make a complete 180-degree arc into ambient territory with "Synthesis". Gentle guitar strings fluctuate across deeper keyboards and whispered, sparse vocals, eventually escalating into a near-industrial electro throb. The aim of instrumental "Nordlys" is perhaps a more creepy alternative to the viral Vertebrae material, a flood of raging immersion as massive chords crash into a subtext of barely perceptive melody, then a straight on wind-wash of melancholic, melodic indie rock with a psychedelic underpinning. Lastly, there is another surprise in "The Sleeping Gods", a rousing Viking folk piece dowsed in resonant percussion, acoustic musings, serious vocals; something Godspeed! You Black Emperor might write if they desired to pay tribute to the Norse mythos and somehow developed ice in their testicles and veins.

Really, it's just another superbly tuned experience for those willing to join Enslaved as their expanding signals create circular ripples into the bloodstream of a broader aesthetic spectrum. Simultaneously, it does not abandon the band's black metal roots, and wisely confines some of the more experimental material that might have wound up on a future full-length. This is a band who, first and foremost, are concerned in writing music. Enduring, compelling music. I have not found myself disappointed with anything they've released since they started to appreciably expand their borders (Mardraum in 2000), and this EP is far from an exception. "Heimvegen" takes a minute or so to truly develop; "Synthesis" might have lost me for a few seconds; but otherwise there's just nothing here I'd ever want to change.