Incantation - Upon the Throne of Apocalypse (1995) 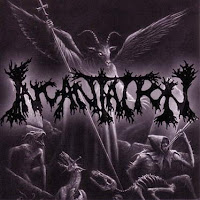 Imagine you were to go to your nearest Hearse dealer and take a shiny new funereal ride out for a test drive. Now, imagine going back to that same lot a year later after hours, blow-torching that same vehicle and then taking it out for a joyride...using only the reverse gear. Not one of my most overt analogies, but it pretty much sums up Upon the Throne of Apocalypse, an alternate recording of Incantation's crushing sophomore Mortal Throne of Nazarene which was released but a year after the first. Apparently the band and the label had some disagreement over the audio quality of the studio album, and went back to the well to create something more supposedly ominous and issue it through a limited edition.

Understandably, there are two camps regarding this record. The first believes in and justifies its existence, claiming they prefer the deeper, bass-heavier tone of the re-release, and that it better suits the band's cavernous aesthetic. The other had no problem with Mortal Throne of Nazarene as it was, and considers this a bit of a ripoff. To be fair, Relapse put out only like 1000 copies of this CD, so it wasn't meant to be some widespread scam, simply a means to make themselves happier, presumably the band and also a chunk of the fan base. Had this been the 21st century, Incantation might have released this themselves through a website for a few bucks, perhaps iTunes or a 'Pay As You Will' scenario for the fans. Or maybe released it with a remastered or re-issue of Mortal Throne of Nazarene, or as part of a fan package with a bunch of their demos and other materials. But this was 1995, and the timing of its manifestation was slightly suspect. After all, this was a pretty underground band even in its heyday, so who really cared? I guess a thousand or so people...

Now, I happen to love Mortal Throne of Nazarene for all its benefits and flaws, so I fall into the latter reaction. Not because of some implied, sinister machinations of the rough mix's presence, but because I rather appreciate the contrast in tones found on that incarnation. Upon the Throne is deeper and perhaps darker, but only in the most obvious stripping of the mix. I can understand why it would feel more streamlined to the dank and desolate, crushing weight of the band's material, and certainly the majority of the Incantation worship bands existing today go for this approach, but it lacks the dynamic disconnect between Craig Pillard's enormous guttural resonance and the higher pitched grinding tumult of the guitars, a subterranean approximation of Bolt Thrower's bludgeoning with a more versatile exploration of tempo. Thus, in exchange for making the music a bit 'darker', the overwhelming shock of the vocals (their most potent and distinct characteristic) is lost a little on the 1995 version, and some of the bright curvature of the guitar grooves is also dimmed.

There's also the notion I've heard that the Mortal Throne mix is too 'clean', but that's nonsense. It is not tidy in the slightest, but septic and pummeling in line with many of the more intense, extreme death and grind acts of the early through mid 90s. The track list is precisely the same on both releases, just presented in reverse, which was a lot bigger deal at the time than it is now with the age of mp3 players and barely anyone listening to albums in order (critics and purists being the exception). However, I must say that I preferred the album's initiation to tear my skin off with "Demonic Incarnate", rather than the trudging brute that is the 8+ minute "Abolishment of Immaculate Serenity" opening the ceremony. I felt that epic was better suited to the depths of the disc as a grand finale, so I simply do not see the advantage to having it the other way. I also preferred having the extra leads on the album.

Upon the Throne of Apocalypse is pretty much a waste of space, even if I can discern why some listeners would prefer this more earthen, dreary copulation of tones. It's more consistent, but at the same time less interesting because the striking disparity of its brazen brutality is muted. Being a limited edition, there is an obvious appeal for collectors, but I feel like the material itself was best presented through Mortal Throne of Nazarene, which joins the debut Onward to Golgotha as a timeless US classic of boundary forcing, grotesque obscenity. Even the cover art choice here is not so appealing. It wasn't broken, it didn't need fixing, and I can only imagine the turbulence that would ensue if Relapse had green lit the same treatment for a dozen other classics, but then, this is a label known for shaky relations with their artists. (John McEntee himself had friction with them for some years).