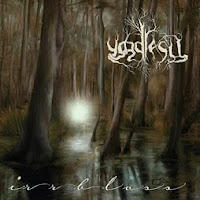 Yggdrasil's 2009 sophomore Vedergällning was a beast of an effort, trumping their debut and thrusting them to the heights of what the folk metal sphere has to offer a starving audience which so often is forced to settle with sillier bands. Lush, beautiful and fully in tune with its black and Viking metal influences, carefully balancing both its clean and rasped vocals, melodic driving guitars, synthesizers, tight drumming and traditional adornments like violin and mouth harp. I find its successor Irrbloss to be a mildly less intricate experience, but nonetheless hitting a lot of the same emotional strings, with a noted improvement in the vocal arrangements that deserves a mention.

Snarling passages are alternated with clean male and female vocals, and to the band's credit these never develop into forgettable fodder as they do in many similar outfits who bite off more than they can chew simply for having such diverse elements available to them. The majority of the material here flows along at a mid-pace, strung across thick chords of somber, inherent melodies while flurries of folkish leads are threaded through the anachronistic landscapes of "Bergtagen", "Tokikvad" and "Uppåkra. The multi-layered vocals are formidable, hurling one back into the annals of memory as if the host of a centuries old village were surrounding him with song, while the rhythm section is tremendously competent at building power behind the notably simplistic guitars. Just listen to the amazing chanted intro to "Skaldefader" and be blown straight into the dark ages.

They also excel in cleaner climes, like the intense escalation which inaugurates "Norrland", or the closer "Kungabål", pretty much pure, sorrow swollen string folk with gorgeous female vocals. Most of the tracks are managed into accessible sized bites, with only a few stretching themselves to greater lengths ("Tokikvad", "Norrland"), so there is very little of the droning repetition that often poisons the more pretentious artists in this category. The production is full and glistening without being overly digitized or polished, and probably my only issue is that the individual guitar lines are often drab in of themselves. Not that Yggdrasil are supposed to be excessively sprightly or foolish sounding; they are in fact solemn and poignant. But it would be a positive if the band's wonderful skill at arrangement could be broken down into its components without losing some of the mood and sorcery. That aside, while Irrbloss doesn't offer anything above or beyond its predecessor, this is still a strong album by a band dedicated to doing this right.