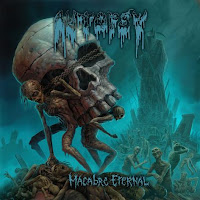 It was difficult to deliberate as to whether Macabre Eternal is more of a relief or a disappointment, but I'm settling for a little of each. Truly one of the single most anticipated offerings of the death metal genre in 2011, it's the first Autopsy long form in 16 years, or 19 if I can exclude Shitfun (and believe me, I'd love to). In the interim, the band's popularity has not only maintained, but seen an exponential increase. I'll be frank with you, there were not nearly enough folks singing this band's praise back in the late 80s, early 90s (I'm not sure if there was much comprehension or tolerance for Reifert's cunning and crude aesthetics at that time), so it's been refreshing to see them come to life through the years, new generations lavishing praise upon their classics Severed Survival and Mental Funeral.

This is not necessarily the band's 'comeback', since they squeaked out a single and EP in the past few years, the latter of which built my own bloodied expectations to a fine froth. I'm happy to report that there are no redundancies here with either of those releases. Macabre Eternal is a brand new, full-length Autopsy with a number of strengths and weaknesses all unto itself. The artwork is stunning and appreciable (excepting perhaps the logo/title coloring), the production the most bold and bright of any of the band's works to date, and there's a renewed sense of creativity in the writing that I had not expected. Sure, there are nods here or there to the band's formative backlog, and this album thankfully abandons the sludgier, forgettable drivel they churned forth in the mid 90s, but I was surprised that it's no mere product of derivation. So, for instance, you might hear the early Sabbath meets early Death that you expect from the first two records and their moderately death/doom leanings, but even these slower manifestations possess much versatility.

Unfortunately, I found that there were treacherously few songs that truly stuck out to me as I kept listening through Macabre Eternal. "Dirty Gore Whore" is certainly counted among the winners, with its zippy and explosive verse guitars and its torn throat narrative. Fast paced, fluid and original, I enjoyed this from beginning to end, both the searing and wah-wah pedaled leads that transition into the jarring tension of the bridge. Also unexpected was the 11+ minute epic "Sadistic Gratification" which explores perhaps the widest contrasts and emotional range of any Autopsy tune to date. The slower, instrumental doom sequence that inaugurates this track is truly something to behold, culling back to the Retribution for the Dead material if it were more melodic and distinct, parsing from surprising tranquil bliss to jaw crushing force and then back again, once again in vocals that tell a story. I especially loved the trade off between the female screaming and the menacing mockery near the climax of the song (around 9:30 in).

Then there is the rest of the album, which, while 'good enough' never really settled in memory outside of a few scattered riffs. Straight, groovier death/doom pieces like "Always About to Die", "Sewn Into One" and "Seeds of the Doomed" rollick along with a rank, ritual effluvia, but they seemed rather predictable, while the bouncier "Born Undead" maintained its charismatic vocal slather at the expense of its rather mediocre notation. Others are more concentrated and complex, such as the accelerated miasma of "Deliver Me from Sanity" or "Hand of Darkness", with its Leprosy-like rhythm beneath the lead, but they still feel like they're missing that one, inspirational guitar that would force them over the top like their betters here. Perhaps the one constant of quality here is that of the vocals, vintage Reifert with perhaps a hint of influence from Necrophagia's Killjoy (not unwelcome).

The album is not nearly so menacing nor malevolent as Severed Survival and Mental Funeral, but then, that's from the perspective of one inundated with about 20 years of cloying and grisly death metal since hearing such cult fare, and certainly one could not expect their equivalent. However, Autopsy is a band I do turn to for the atmosphere they curry in spite of their lewd primacy, and I feel that in that department, it falls short of even Acts of the Unspeakable. This is more of a clean, theatrical Autopsy prepared to take all comers with a more brazen variety of their old school riffing, and also cite innovation where it can, but too often succumbing to a filler mentality amidst the better elements of the songwriting. A decent album, I think, but not quite measuring up to its preemptive tendrils of vaporous decay, the carrion cloud of cult comforts it drifted in on.

Posted by autothrall at 7:22 AM