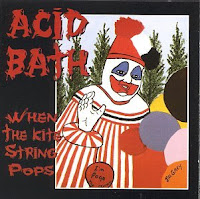 When the Kite String Pops was released in 1994 to very little fanfare. Like most, I discovered this record (and the follow up, Paegan Terrorism Tactics) well after the band had disbanded in 1997 following the death of Audie Pitre, the bass player and founding member. And, I'm glad I found this album, because it belongs in the collection of any doom, sludge, or groove aficionado. The compositions often seem schizophrenic, swinging wildly between a slow doom riff to a staccato machine gun blast, and it often seems as if a thick layer of madness is somehow keeping it all together. Unlike the more self-aware and carnivalesque metal that purports to be evil while offering a nod and a wink, this record is just downright filthy and has me pulling police reports from Louisiana, convinced that there must have been a string of murders that somehow went unreported. At times, this record seems more like a confession letter than fiction.

That's also what makes it so remarkable. From the first track, the blend of sludge, doom, southern rock, and thrash is evident. The record starts off with feedback and syncopated drumming that builds tension until, suddenly, it stops, resolving itself with a low bass line. The kite string has officially popped, and we are all well and truly fucked. A few measures later, the guitar provides some higher pitched contrast and “The Blue” is in full effect. The instruments are layered on until Dax Riggs screams “Across your face I see what you are,” and the song takes a turn towards something groovier but no less heavy. Like many Acid Bath songs, “The Blue” transitions between slow and fast with incredible precision. The transitions never feel forced, and Riggs' vocals go from a hardcore scream to croon without seeming forced or awkward.

'Everybody whispers where birds fall dead
I smell the yellow sickness churning inside your head
Wiping flecks of foam, twisting with rabies
Bloody, we run through these fields of dead daisies'

While “The Blue” sets the tone for the album, and many other songs incorporate the style shifting seen here, none of the tracks feel like a rehash of previous ones. This record builds throughout the first five songs, culminating in “Jezebel,” one of the fastest tracks on the album and probably the most straight forward example of what happens when the full force of Acid Bath is unleashed. The tremelo picked guitar sections hearken back to Heartwork era Carcass without feeling derivative. It is here that we see the first big shift in style on the record as the relentless guitars give way to a lone bass line at the beginning of “Scream of the Butterfly,” perhaps the creepiest ballad ever written. The song builds from the lone bass line and along the way picks up clean vocals and the occasional guitar flourish until the last minute when the drums become more audible and driving, leading us to the grisly conclusion and some of my favorite lyrics from the album.

While I would be perfectly content if the album ended here, it doesn't. The album reverts back to the beginning and “Dr. Seuss Is Dead” begins much as “The Blue” does: feedback gives way to a sludgy bass line, and we are in for eight more tracks of madness and even another ballad. The rest of the album is as unhinged and brilliant as the first half, and during “Dope Fiend” it seems the band asks its listeners why we are punishing ourselves by experiencing this album at all:

Somehow, all of these disparate elements combine to form something coherent, and the conclusion of the album makes me feel a bit more like I just escaped a serial killer's lair than listened to an album. The wild style shifts conjures images of an unhinged person who may be tranquil and sedate one moment until something snaps and they have a knife in your face asking if you ever wanted your last moment to be one in which you glimpse your still beating heart.
Verdict: Epic Win [10/10]
http://www.myspace.com/realacidbath
Posted by Anonymous at 2:15 PM