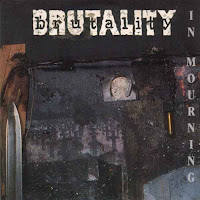 And another great death metal band abandons their iconic logo...for reasons I must assume have something to do with the mid 90s and its climate of bricks and hardcore. The evolution of the street, keepin' it all real. Banal typeset within banal typeset. A crass urbanization of extreme music. Cover your eyes. Thankfully, Brutality have not mutated where it counts, in actual musical content, and In Mourning was a no-nonsense, solid third and final offering for Nuclear Blast records. Also their swansong, their last statement of hostility against a well saturated, dwindling background of ideas. The band had dragged Jim Morris along for this ride, and it's another of the guy's great productions: clear, powerful guitar tone, great mix of percussion and vocals, perhaps the most polished of the three Brutality full-lengths, but it's a toss up.

There are about four songs here that number among the best they've ever written, and arguably the best of their career. "Obsessed" is a start/stop burst to chug barnstormer redolent of the works of Deicide, Cannibal Corpse and other peers, but it's centric rhythms are matured and decidedly old school enough to get the blood pistons charged, solos stoking cerebral spikes, toying with the listener as chords collide with other chords. "The Past" opens with another total kick ass Death-style rhythm, frenetic melody winding down above the concrete, squealing coronary. Yet another incredible lead sequence here to nurture the imagination. "Destroyed by Society" is my favorite individual track on the album, a memorable architecture of bouncing, chugging squeals and miniature solos processed into a matrix of menacing grooves and resonant gutturals. Deeper into the lineup, we've got "Calculated Bloodshed" and its amazing, desolate intro which hits like a more melodic Florida alternative to England's Bolt Thrower.

Unfortunately, outside of these selections, the album is less than dominant. The remainder of the songs consistently exhibit the band's dynamic range, never repeating itself with drab abandon, yet there are few riffing sequences that strike so hard into the memory. A few of them, like the 8+ minute "Subjected to Torture" or the closer "Extinction" feel too lengthy, without the strong patterns of notation to guide the listener into the band's murderous apocrypha. Here or there, some guitar will stand out among the rest, but there are often bouts with needless repetition and uninspired, derivative compositions. Still, In Mourning as a whole is quite tight. Brutality might not have lasted in the long run, but no one can accuse them of selling out to the rising mallcore militia that adopted a number of other death metal acts as their Pantera alternative. This is one band that, once getting their shit together around 1992, never really disappointed its audience. They deserve all the adulation of the fallen and obscure, if not for In Mourning then for the two preceding albums.